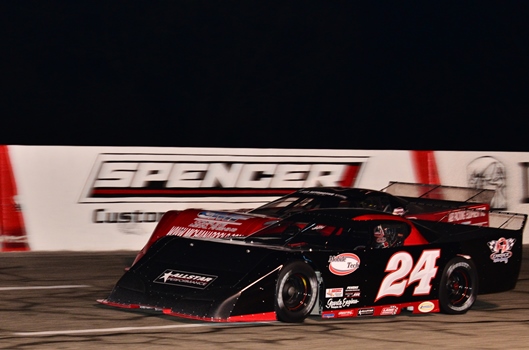 Tyler Roahrig worked his way from 14th starting position all the way to the front, making the winning pass with 12 laps to go and hanging on to win the Intimidator 100 Friday night at Kalamazoo Speedway.  Roahrig cracked the top ten on lap 11 but didn’t crack the top five for good until lap 40 of the 100 lap event.  He took over second place on lap 75 and then made the winning pass on Doug True on lap 88.  From there Roahrig held off Jeff Ganus, Brian Bergakker, True and Matt Frazier to collect the victory.  Tyler’s father, JR, finished sixth beating out three-time defending champion Mike “Bubba” Brooks, fast qualifier Rick Senneker, Tom Thomas and 12-time champion Andy Bozell.  Jacob Maynard picked up the victory in the last chance race.  The win combined with his third place qualifying effort gives Roahrig, who ran his fastest lap on the final lap of the event,  the early point lead over Bergakker (-6), Ganus (-14), Senneker (-24) and Frazier (-28).

The thirty lap Super Stock feature saw plenty of excitement as Brandon Lyons put on an impressive driving display, moving from 8th after the first lap all the way to the lead by lap 8.  From there Lyons held off Jim Leonard, defending champion and fast qualifier Buddy Head, Rodney Smith and Kenny Head.  Cory Pressler led the second half of the top ten over Jake Hopwood, Tom Wright, Nick Pressler and Carl Burlingham.  The victory gives Lyons the early point advantage over Buddy Head (-2), Kenny Head (-12), Leonard (-16) and Cory Pressler (-18).

Much of the off-season talk had been about how great the racing would be in the Pro Stock division in 2016 and opening night did not disappoint.  Defending champion Matt Corliss set quick time and drove through the field to collect the victory over Toby Montgomery, Greg Brown, 2-time champion Greg Haynes and 2011 Modified champion Ben Raber.  Keith Wilfong finished a solid sixth beating out Barry Jenkins, Shane Miller, Zach Westdorp and Josh Highbaugh.  The feature win coupled with quick time gives Corliss the early season advantage over Montgomery (-8), Brown (-10), Raber (-26) and Haynes (-28).

The Southwest Michigan Mini Stock Challenge Series was on hand for the inaugural event of their new series and saw Jerime Damron pick up the victory over Frank Stager, fast qualifier Andrew Brest, Marcus Carlson and Doug Gallandt.  Young Kyle Shannon led the second half of the top ten over Ryan Stutz, Curtis Towne, Sean Elkins and Marcus VanCleave.  Damron takes the early point lead for the traveling series over Stager (-6), Brest (-6), Carlson (-22) and Gallandt (-22).

The Outlaw Cyber Stocks showed up with 17 cars for opening night.  When the smoke cleared it was Dan Rigoni standing in victory lane, after setting quick time earlier in the evening.  Nick Layman ran a solid second ahead of Larry Richardson, Brian Gregersen and 2015 Flip Flop Cyber Stock champion Brock Sweeter.  The second half of the top ten was led by Heath Bronkema over Doug Nelson, Mason Dykstra, John Kiewiet and Ryan Hufford.  Rigoni takes the early advantage in the points over Layman (-10), Richardson (-10), Gregersen (-22) and Sweeter (-28).

The Flip Flop Cyber Stocks kicked off the season with a 15 lap feature that saw a familiar name come out on top, well sort of.  Although Jeff Bozell struggled in his Outlaw Super Late Model, having to come through the last chance race and then completing only one lap in the feature, opening night will be a night that he will remember fondly as his daughter Valerie Bozell picked up her first win in the Flip Flop Cyber Stock division, in her first ever start!  Tony Lobretto finished second ahead of Lane Head, Travis Reniger and Keith Ribble.  Valerie Bozell also set quick time and leaves opening night with the point lead ahead of Lobretto (-6), Lane Head (-16), Reniger (-16) and Ribble (-22).

With the season opener in the books Kalamazoo Speedway now moves into the heart of the season starting this Friday, May 6 with a Full 5 in 1 NASCAR Racing Program featuring the NASCAR Whelen All-American Series Outlaw Super Late Models.  The Super Stocks, Pro Stocks, Outlaw Cyber Stocks and Flip Flop Cyber Stocks will also be in action, with the Rent-a-Rides making their first appearance of 2016.  In addition to the great racing action fans that bring their ticket stubs from the season opener will be entered in a drawing to win a FREE Big Screen TV!