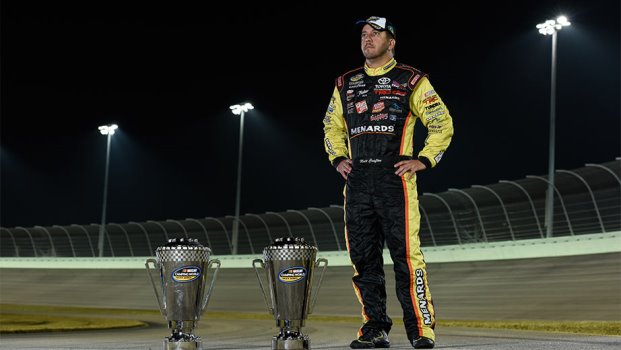 Kalamazoo  Speedway  officials  are  excited  to  announce  that  Two-time NASCAR  Camping World Truck Series Champion Matt Crafton  will  race in this  years  Kalamazoo  Klash.  The 24th Annual  Klash,  on  Wednesday  night,  August  10,  is  one of the  keystone  events  on  the  exciting 2016 calendar  at  “The Zoo”.

Matt Crafton drove his way into the NASCAR history books in 2014, becoming the first NASCAR Camping World Truck Series (NCWTS) back-to-back champion, winning titles in 2013 and 2014. In a season that was characterized by success, 2014 marked the first time in Crafton’s 15-year career in the NCWTS to win more than one race in a season, prevailing at Martinsville (Va.) Speedway and Texas Motor Speedway in Fort Worth. The Tulare, California native extended his NCWTS record for consecutive starts to 338, recorded 13 top-five finishes, more than any other season in the NCWTS, and led a career-high 298 laps in 11 races.

The  big  dance  will  be  the  24th  annual  running  of  the  Kalamazoo  Klash  on  the  high  banks,  featuring three-time defending Kalamazoo Speedway outlaw Super Late Model champion Mike “Bubba”  Brooks,  four-time race  winner  Terry  Senneker, Steve Needles, Tyler Roahrig and several others.  Crafton, who finished an impressive 4th in last year’s event, will be looking to add his name to the list of winners in this marquee event.