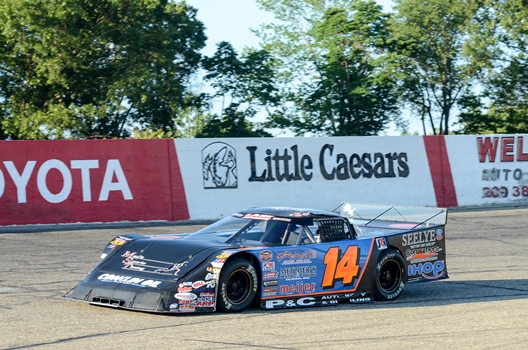 In the Super Stock feature Nick Pressler jumped out to the early lead. On lap eight, a caution came out and Keegan Dykstra had nowhere to go. Unfortunately he had to be taken away on a wrecker. Nick Pressler had the lead until 10 to go when Buddy Head charged all the way from last starting place to take the lead. He went on to win for his 3rd week in a row. Nick Pressler ended up finishing second after battling with his brother Corey Pressler for the last few laps.  Corey finished third while heat race winners Kenny Head and Adam VanAvery finished fourth and fifth.

The NASCAR Whelen All-American Series Outlaw Super Late Model feature started with Carl Burlingham and Billy Tomlinson on the front row. They traded 1st and 2nd place several times before Burlingham was able to claim the lead. After a double file restart, Tyler Heeney was able to wrestle the lead away. After countless lead changes among six different drivers, Mark Shook went on to win the feature. He was followed by Doug True, Matt Frazier, Adam Terry and Tom Thomas.

The 40 lap Sprint Car feature saw Troy DeCaire emerge victorious over a stout field of drivers.  Jason Blonde was the runner-up beating out Jason Conn, Derek Snyder and Tristan Spiers.  The second half of the top ten was led by John Geisler over Ron Larson, Nick Landon, Christopher Randolf and Teddy Albert.

Friday had a strong showing of 88 cars in three different divisions of racing. The event featured the GT Products Pro Stock Bash with a field of 20 cars, the Midwest Compact Touring Series brought 29 cars to the speedway and the Burg vs. Kalamazoo Spectacular had a total of 39 cars. With rain rolling in, the speedway was forced to cancel the heat races and begin the night with features.

The Midwest Compact Touring Series A feature started with 18 cars. Craig Frase jumped out to the lead from the outside pole. He had the lead for the first three laps before it was taken over by Corey Woods from the 8th place starting position. The race went green until five laps to go when Jake Albright spun out, collecting Don Rufener; neither driver was able to restart the race.  With a double file restart, Corey Woods was able to pull back out to the lead. He went on to win the feature followed by Bo Hoelscher, Paul Bittle, Curtis Gray and Pete Doxey.

The B feature rolled off with eight of the scheduled eleven cars. Adam VanAvery had the lead at the drop of the green flag. He held the lead the entire race and ended in victory lane. Second place went to Will Slaughter, third through fifth finished with Ryan Osborn, Scott Hopson, and Kalamazoo Speedway regular Kenny Wright.

Next up was the 2nd DOT Tire Spectacular of the season, featuring drivers from the Burg vs. the stars of Kalamazoo Speedway.  After taking the green, Ryan Osburne turned in traffic and had a hard break hitting the outside wall. The race restarted and ran until the checkered flag. After three lead changes, Kalamazoo Speedway driver Paul Bittle out of South Bend Indiana went to victory lane. Second through fifth finished as follows: Tyler McGhan, Don Rufener III, Danny Payne and Kalamazoo Speedway regular Ryan Hufford. The B Feature win went to Matt Elsey with Christina Rantz in second. Third through fifth were TJ Decker, Curtis Towne and Bryan Sawyer.

The GT Products Pro Stock Bash was the final event of the night. Brent Hook held the lead being battled by Wil Raber for the first half of the race. The caution came out when two of the Pro Stocks heavy hitters, Greg Brown and Bob Miller spun in turn 4. Greg Brown was able to rejoin at the tail of the field after a tire change, but Bob Miller was unable to restart after being hit by a lap car. After leading several more laps, Brent Hook lost the lead to Zack Cook. Cook was able to maneuver lap traffic exceptionally well on his way to victory lane. Second through fifth finished as followed: Brent Hook, Wil Raber, Barry Jenkins and Keith Wilfong.

Join us this Friday, July 28 for another five in one NASCAR racing program featuring the NASCAR Whelen All-American Series Outlaw Super Late Models.  It will also be Orrin B Hayes “Outlaw CJ” Jeep Night and Teen Night.  Race time is 7:30 sharp.