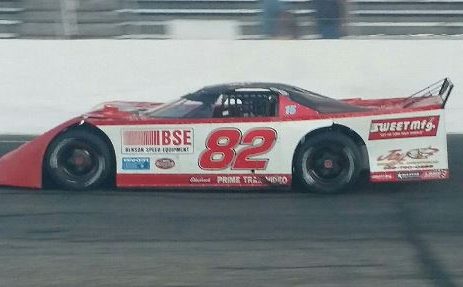 Template body cars and Outlaw cars took to the fast 3/8-mile oval of Kalamazoo Speedway in Michigan on Tuesday evening to practice for the 23rd Annual Kalamazoo Klash.  Teams had three hours to try to dial their cars in for Wednesday’s races.

Some of the usual suspects can be found near the top of the speed chart like Terry Senneker Jr. in his Outlaw Late Model, and 2014 Snowball Derby champion John Hunter Nemechek in his template Super Late Model for the ARCA/CRA Super Series.

But neither of those drivers were right at the top, like they were expected to be.  Instead, both divisions saw a couple surprise drivers pace each session.

For the Outlaws it was Tom Thomas, who came to the track with an open trailer, who led practice with a lap of 11.97 seconds around Kalamazoo Speedway.

“It’s just a practice day, but it’s a good way to start,” Thomas told Speed51.com powered by JEGS.  “It’s been a year since we’ve been here.  We threw a lot of stuff at it today, so hopefully it’ll carry over to tomorrow.  It should be a good race and I’m looking forward to it.”

For the CRA Super Series template Late Models it was Ali Kern who sat atop the leaderboard.  Her time of 12.837 seconds just barely beat out Nemechek’s lap by two one-thousandths of a second.

“It makes me feel really good,” said Kern.  “Everybody has been working really hard towards that one common goal, and that’s to win a race.  Hopefully we can carry that speed over to tomorrow and win us one.”

Kern has run the majority of the ARCA/CRA Super Series schedule each of the last years, but is still seeking that ever elusive first victory.  She said she feels that she has as good a chance as anybody of scoring the win on Wednesday evening.

“It would be huge,” she said.  “It would just be a huge confidence boost for everybody.  So many people put so much effort into this and they don’t get anything out of it.  We deserve to win.”

The Kalamazoo Klash XXIII can be seen live on 51 TV on Speed51.com for just $19.99.  The pay-per-view broadcast can be purchased by clicking here: http://speed51.com/51livetv-events/