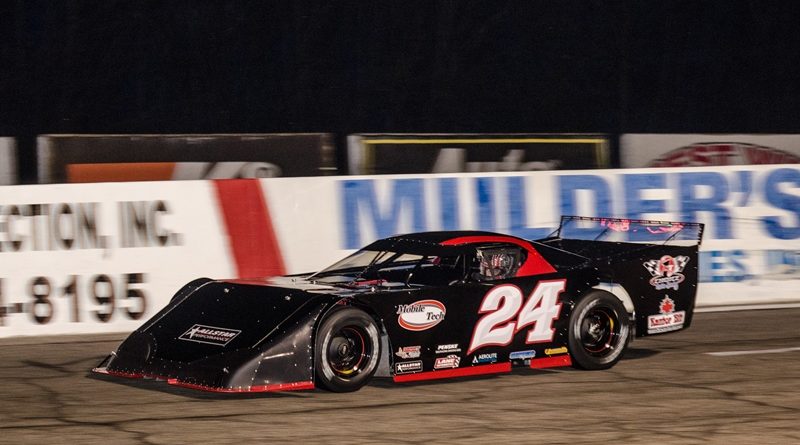 After a third straight runner-up finish in 2016, Tyler Roahrig questioned whether or not he would ever win the Kalamazoo Klash.  Two years later, “The Rocket” celebrated his second straight win in Outlaw Late Model racing’s biggest race Wednesday night at Kalamazoo Speedway (MI).

Just one year removed from out-dueling 2015 NASCAR Cup Series champion Kyle Busch, Roahrig started 13th and methodically worked his way to the front of the field.  By lap 88, he was up to third, behind 2015 Klash winner Jeff Ganus and his father JR Roahrig.

That was when the first caution of the race came out.  A lapped car spun on the front stretch, leaving Ganus and the elder Roahrig nowhere to go.  While it was an unfortunate incident that ended his father’s race, Tyler Roahrig was able to avoid the chaos and inherit the lead for the upcoming restart.

“We went quite a few laps green there up until 37 to go then there was a wreck there,” Roahrig told Speed51.com.  “I kind of waited there too long to turn up the wick and I didn’t realize how close it was to the end, and then I found myself in third.  My spotter said forty to go and that’s when I really started to gas it.  Unfortunately, that wreck happened and took out Jeff (Ganus) and my dad (JR) which is a real bummer.  We would’ve had a really good race had that not happened, but my car was getting really, really good there right before that, and then after that yellow it was spot on.  I was happy with how the car ran.”

After the restart, Roahrig drove away from the field.  However, a yellow flag with 18 laps to go bunched the field back up, putting 2012 track champion Brian Bergakker next to him on the restart.  Bergakker was able to take the lead from Roahrig off the restart, but could not hold on as Roahrig wrestled the lead back away from him for good a few laps later.

“I guess I took the wrong lane on that last restart,” Roahrig said.  “I took the outside and Brian (Bergakker) got around me on the bottom.  I knew we were faster than him once we got going and luckily I got back around him on the bottom.  I was just praying for no yellows just cause this thing is kind of hard to get going on restarts.  But we came out on top.  Packed grandstands, full field of cars, what more can you ask for?”

Bergakker would go on to finish second in the Kalamazoo Klash, just a week and a half removed from winning another prestigious Outlaw Super Late Model race, the Stan Yee Memorial 150 at Flat Rock Speedway.  It was his third runner-up finish in the Klash since 2014.

“I was just trying to keep my tires clean before we went green,” Bergakker said.  “I kind of thought here’s my chance and I’m going to go before him and I did.  The car really stuck coming down the front stretch.  I said if I get a good run coming off of two I could probably get him.  I did and I got in front of him, but the car was just too free coming off the corner to stay in front of him.”

For Roahrig, it was his second straight win in the prestigious Kalamazoo Klash.  By doing so, he became only the third driver to ever win consecutive Klashes, following four-time winner Andy Bozell and five-time winner Terry Senneker.

“That’s pretty awesome,” he stated.  “I noticed one thing this year.  I wasn’t nearly as nervous coming into the day as I was in years past just because I hadn’t won it yet and it was just looming on me, like when am I going to win it?  Now we got two in a row and that’s really cool.  I don’t know how many other guys have won back-to-back.  I think Andy Bozell and Terry Senneker have, so that’s pretty good company to be in.

Adam Terry would go on to finish third, followed by 2011 Klash winner Phil Bozell and Brandon Lyons rounding out the top five.