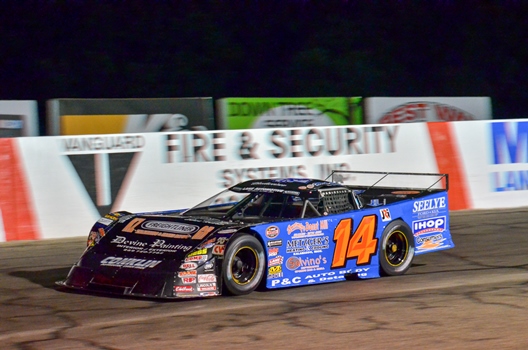 Mark Shook started deep in the pack, methodically worked his way through traffic and then passed three-time defending champion Mike “Bubba” Brooks in what would be the winning pass Friday night at Kalamazoo Speedway.  Brooks held on to finish second ahead of Matt Frazier, 1995 Super Stock champion Billy Shannon and former Plymouth Speedway Late Model champion Adam Terry.  Fast qualifier Tom Thomas led the second half of the top ten over Rick Senneker, 2011 champion Phil Bozell, Chris Garrett and Tyler Heeney.  Mike Zordan and Bozell won the heat races.  With the victory Shook now hold a slim 9 point lead over Senneker with just three point races remaining on the calendar.  Brooks (-37), Thomas (-114) and Frazier (-127) all still remain in contention for the title as well.

The Southwest Michigan Mini Stock Challenge Series made their next to last appearance of the season at the Zoo.  Point leader Jerime Damron bested fast qualifier Andrew Brest down the stretch to pick up the victory.  Kyle Shannon finished third ahead of Matt Noble and Doug Gallandt.

This Friday, August 5 action resumes with a full 6 in 1 show featuring the NASCAR Whelen All-American Series Outlaw Super Late Models.  With just three races to go the top five in points are all within 127 markers, with Mark Shook and Rick Senneker separated by only nine points!  Also in action will be the Super Stocks, Pro Stocks, Speed Pro Glow Modified Super Series, Outlaw Cyber Stocks and Flip Flop Cyber Stocks.  It will also be the final Teen Night of the year, as all kid 6-15 will be allowed entrance for just $2!  Finally it will be the first ever Big Truck Night at the Zoo!  Anyone driving a big truck to the event will be given one FREE general admission ticket and will be allowed to make some laps around the track during the intermission.