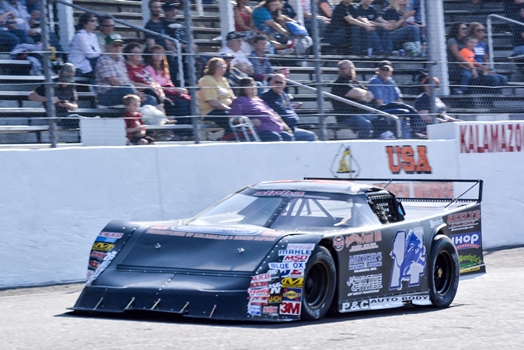 Mark Shook was the fastest of 24 NASCAR Whelen All-American Series Outlaw Super Late Models during qualifying Saturday night at Kalamazoo Speedway with a lap of 12.901 seconds. Unfortunately just minutes after qualifying rain began to fall at the speedway and forced the cancellation of the rest of the program. Twelve time champion Andy Bozell qualified second among the stout field of Late Models ahead of Billy Shannon, Todd Currier and Jeff Bozell. Point leader AJ Foote led the second half of the top ten over Phil Bozell, Matt Frazier, two-time defending champion Mike “Bubba” Brooks and rookie Jerry Pierman. Since qualifying was completed, points for qualifying will count and that now puts Foote just a single point ahead of Shannon for the point lead heading into this Saturday night’s “USA Earthworks 40”. Phil Bozell (-20) is third in the standings ahead of Currier (-42) and Shook (-45).

17 Super Stocks were on hand to race for $750 to win in “Super Stock Mania Presented by Lane Automotive”. Defending champion Buddy Head was the quickest in qualifying with a lap of 13.515 seconds. Brandon Lyons timed in second ahead of Chris Shannon, Eric McGlothlen and former champion Kenny Head. Tom Rutherford made his first appearance of the year in a Super Stock and qualified sixth ahead of Jon Beach, Tom Wright, former Outlaw Cyber Stock champion Jack Cook and Ron Landis. Buddy Head stretched his point lead by just two points and now holds an 18 point advantage over Brandon Lyons heading into this Saturday’s event. Chris Shannon (-36) is currently third ahead of McGlothlen (-39) and Kenny Head (-47). “Super Stock Mania Presented by Lane Automotive” has been rescheduled for this Saturday, May 23.

The Pro Stock division once again brought a solid field of over 20 cars and saw Matt Corliss set quick time with a lap of 14.598 seconds. Former champion Greg Haynes was second fastest ahead of defending champion John Foote Jr., Brent Hook and Keith Wilfong. Greg Brown led the second half of the top ten over Danny Oxford, last week’s winner Chaz Hook, John Bassett and Wil Raber. Although Brent Hook continues to lead the points Corliss has now cut the gap to just 2 points heading into this Saturday’s event. Foote Jr. (-16), Brown (-32) and Wilfong (-36) round out the top five.

The Mini Stock division saw Logan Knight continue his hot streak by setting quick time with a lap of 14.585 seconds. Former champion Frank Stager was second quickest ahead of Steve Potter, Andrew Brest and Kyle Shannon. Notables included Brian Echtinaw, who qualified 7th. As for the points, Knight continues to lead by 39 over Stager with Echtinaw (-69), Potter (-69) and Chuck Greer (-90) all within striking distance.

The Flip Flop Cyber Stocks saw Keith Ribble run the fastest lap of the qualifying session, with a lap of 17.661 seconds. Brad Hall qualified second ahead of Sean Hughes, Brock Sweeter and Dwight Anderson. Notable qualifiers included Lynne Zachary in 7th and Joey Failing in 10th. Hall now leads the points by 21 markers over Sweeter with Ribble (-39) in third.

This weekend marks the first double header weekend of the season at the Zoo. On Saturday, May 23 another Full 6 in 1 Show rolls in to town featuring the “USA Earthworks 40 Presented by Titan Equipment” for the NASCAR Whelen All-American Series Outlaw Super Late Models. The Super Stocks will be running “Super Stock Mania Presented by Lane Automotive”, which will see the winner bring home $750. Another full field of Pro Stocks is expected as well as Brent Hook will put his slim 2 point lead on the line. The Mini Stocks will run “Mini Stock Mayhem Presented by Sweet Manufacturing”, which will pay $400 to win. The Outlaw Cyber Stocks and Flip Flop Cyber Stocks will complete the racing portion of the program. Then after the races there will be a pit party with a DJ to kick off the first holiday weekend of 2015! Pit Gates will open at 1:00, general admission gates will open at 3:30 and the races will begin at 6:30.

Then on Sunday, May 24 the season will finally kick off for the 4 Cylinder Enduro Series with the running of the Veterans 200 Enduro Presented by Little Caesars. The action packed evening will be kicked off with the fan favorite Spectator Drags and will conclude with the always entertaining Powder Puff race. Pit Gates will open at 2:00, general admission gates will open at 4:00 and the event will start at 7:00.