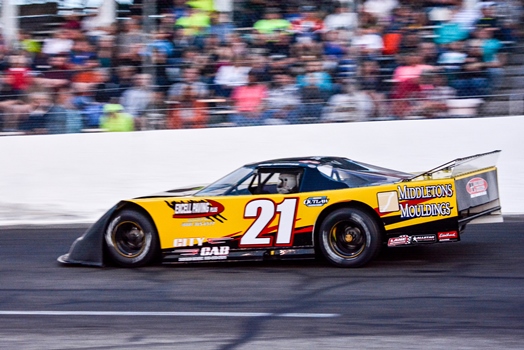 The Pro Stock Spring Fling Presented by Orrin B Hayes saw young Chaz Hook pick up the victory over his father Brent Hook. Matt Corliss set quick time and worked his way through the field all the way to third beating out Robbie Ferrier and Zach Westdorp. Nick Pressler led the second half of the top ten over defending champion John Foote Jr., Keith Wilfong, Greg Brown and Will Raber.

Keegan Dykstra picked up his second consecutive win in the Outlaw Cyber Stock feature. Dan Rigoni set quick time and drove all the way up to second while Nick Layman, Jerry Jansen Jr. and Larry Richardson rounded out the top five. The second half of the top ten was led by Doug Nelson over Bob Miller, Jeremy Young, Scott Custer and Kyle Jansen.

Next Saturday night the action continues with another full 6 in 1 show featuring the Titan Equipment 40 for the NASCAR Whelen All-American Series Outlaw Super Late Models. AJ Foote brings a seven point lead over Billy Shannon into the third night of racing. The Super Stocks will also be in action with the running of Super Stock Mania Presented by Lane Automotive. The Pro Stocks, Mini Stocks, Outlaw Cyber Stocks and Flip Flop Cyber Stocks will complete the program.