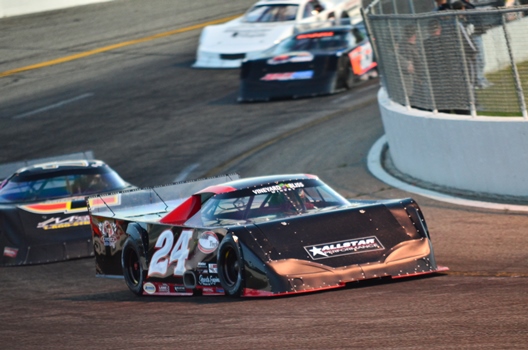 It was a night of remembrance as the best Outlaw Super Late Model racers came together Wednesday in memory of the late Gary Terry with the inaugural Gary Terry “Follow Your Dreams” 125. It was also the night for the realization of a dream as Tyler Roahrig took home his first major victory at Kalamazoo Speedway (MI).

Roahrig of Mishawaka, Indiana has run a menagerie of cars in his career, but the Outlaw Supers have been the mainstay. He has come close in the track’s biggest race, the Kalamazoo Klash, in the past, finishing second in 2012 and 2013.

After getting the lead near the 50 to go mark Wednesday night, Roahrig was halted by a competition yellow, which brought Kalamazoo ace Terry Senneker, Jr. into the mix at the front after he made an early pit stop. But the four-time Klash winner was unable to make a challenge as Roahrig led the final 25 laps and was nearly overwhelmed by the moment in victory lane.

“I don’t even know what to say. I feel so honored to win this race,” Roahrig said in victory lane.  “The field of cars here, I couldn’t think of a better field. It’s the first time I’ve ever beat the 37 (Senneker) here, just doing that is a feat itself. I’m so thankful for Gary. The entire Terry family I’ve known them ever since I can remember. I’m so proud to do this for them, they’ve been friends with me and my family. I’ve never met someone they weren’t friends with. I’m so proud to win this right now.”

Roahrig started the race 12th, but worked his way to the front in the race’s first 75 laps, eventually clashing for the lead with the race’s polestitter, his father J.R. The two put on a thrilling five-lap duel through slower traffic with Tyler getting the lead on the outside off turn four just past the 75 lap mark.

“That was fun. Me and him have never really raced hard, especially for the lead. Lot of fun, it was a clean race. Just look at the scoreboard, Senneker, (Brian) Bergakker, (Andy) Bozzel and my dad. The best field I could think of.”

The most dangerous moment for the race came just before the competition yellow at lap 100 when Tyler Roahrig nearly collided with lap traffic going two wide in front.

“My spotter called caution, I guess they yelled it on the radio, and then the two cars in front of me were side by side and it was getting kind of last minute there.  I had to make something happen. I forgot about that competition caution and then I saw the leaderboard, 25 to go. I was happy for that one.”

An on-demand Trackside Now replay of Wednesday night’s race can be found by clicking here.