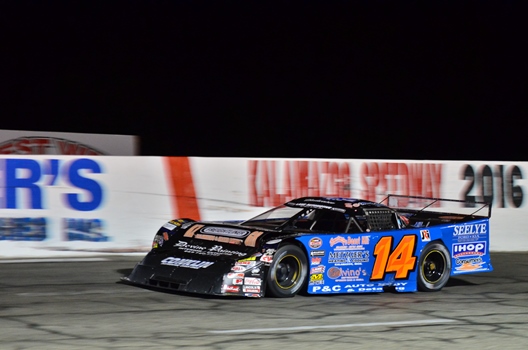 Fan favorite Keith Wilfong picked up the win in the thirty lap Pro Stock feature.  Greg Brown did everything he could do to win his first title but came up just short finishing second in both the race and the title fight.  Fast qualifier Kyle Ribble finished third ahead of Matt Corliss and Ryan Minton.  The fourth place finish gave Corliss the track championship.  Three-time champion Greg Haynes finished sixth ahead of Bob Miller, Barry Jenkins, Matt Maurer and Ron Landis.

After setting quick time in the Outlaw Cyber Stock division Dan Rigoni was forced to start dead last for the twenty lap feature but even that wasn’t enough to keep him out of victory lane.  Rigoni picked up both the feature victory and the season title.  Brian Gregersen finished second ahead of Jeremy Young, Nick Layman and Mason Dykstra.  Dion Vrooman wound up sixth ahead of 2015 Flip Flop Cyber Stock champion Brock Sweeter, Doug Nelson, Ryan Hufford and Logan Meinema.

This SATURDAY, September3 one of the most anticipated events of the season takes place with the annual Call of the Wild Presented by Raceceiver.  This “Run What Ya Brung” event features the famous “Raceceiver Qualifying Showdown” in which the five fastest cars from the final practice session will have the track to themselves for 30 minutes in an attempt to break the world record for speed around a 3/8 mile track.  Just last season Mike Schewchuk ran a 9.924 second lap at 136.034mph to set the world record.  In addition to the thrilling “Raceceiver Qualifying Showdown” the event will also feature a 50 lap main event paying $1,500 to win.