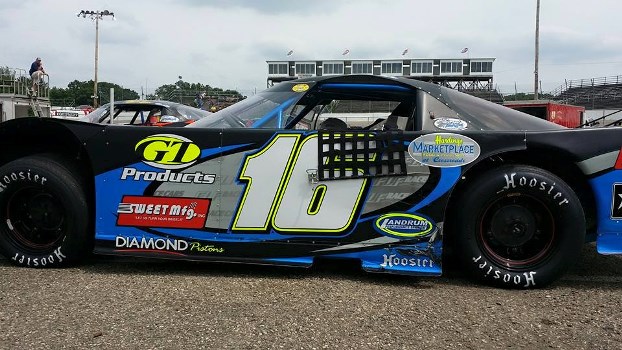 Brandon Lyons picked up a ride at the 11th hour and ended up taking that ride all the way to victory lane in the Lane 75 Presented by Raceceiver for the NASCAR Whelen All-American Series Outlaw Super Late Models Saturday night at Kalamazoo Speedway. Robbie Ferrier finished second ahead of Mark Shook, Matt Frazier and Mike “Bubba” Brooks. Jerry Pierman led the second half of the top ten over Billy Shannon, Jeff Bozell, fast qualifier Rick Senneker and Brandon Zachary. Shook now leads the championship standings by just 14 points over Brooks with Shannon (-36), Bozell (-48) and AJ Foote (-123) still in the hunt as well.

In the Mini Stock division Logan Knight set quick time with a lap of 14.548 seconds at 92.796mph. Knight then started in the 10th position and drove his way through the field to collect the victory in the twenty lap feature. Former champion Frank Stager finished second beating out Chuck Greer, former Outlaw Cyber Stock champion Keith Dunham and Brian Echtinaw. Echtinaw and JR Long collected the heat race victories.

Keegan Dykstra set quick time and the Outlaw Cyber Stock division and then drove from 11th spot all the way to the front and held on for the victory in their twenty lap feature. Dan Rigoni finished second ahead of Scott Custer, Kyle Jansen and Nick Layman. Layman and Brian Gregersen won the heat races.

Nineteen Flip Flop Cyber Stocks were on hand and when the smoke cleared it was Brock Sweeter picking up the feature win. Fast qualifier Brad Hall finished second ahead of Keith Ribble, Rick LaDuke and Jonathon Schuyler. Sweeter and Brooke Derrick collected the heat race victories.

This Saturday night, July 18 another full 6 in 1 show returns to the high banks of the Zoo featuring the Steensma 50 for the NASCAR Whelen All-American Series Outlaw Super Late Models. With the championship points battle really starting to heat up Mark Shook will look to put a little breathing room between himself, Mike “Bubba” Brooks, Billy Shannon, Jeff Bozell and the rest of the field. Also in action will be the Super Stocks, Pro Stocks and Mini Stocks, who will be running Mini Stock Mamba Presented by Pro Automotive. Outlaw Cyber Stocks and Flip Flop Cyber Stocks will complete the program.