Long Tunes up for the Klash With a Win 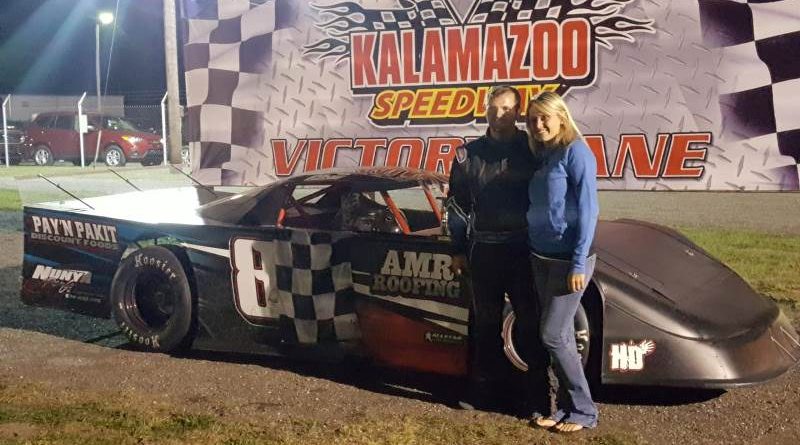 Long Tunes up for the Klash With a Win

The Zoo Stocks kicked off feature events starting 17 cars in their A feature.  Mason May and Billy Yates brought the field to the green. May led on lap one before being overtaken by Rent-a-Ride driver, Zack Postma.  He was able to lead the way for a few laps before Rielly Meade was the beneficiary of 3-4 wide racing, taking over the lead. He was able to maintain the lead, picking up the feature win. He was followed by Jerry Ballard, Colin Bozell, Nick Failing and Taylor Imus.

Outlaw Front Wheel Drives started off their feature with 3 wide racing from 1st all the way back. Brock Sweeter was able to pass Doug Smith and Ben Wilcox to take the race lead on lap 4. Pete Doxey charged from last starting place to into the top five by lap 9, bringing Jeremy Young with him. The race stayed green until 8 to go when Sweeter spun in turn four. Jason Essex, who was running 2nd, took over the lead. Doxey and Essex battled to the checkered flag with Doxey taking home the trophy.  Jason Essex finished a second followed by Jeremy Young, Ricky LaDuke and Doug Smith.

A strong field of 23 Street Stocks took the green flag with rookie driver Kevin Sweat and Dave Simpson on the front row. Josh Zordan was able to challenge Sweat for the lead, taking it over on lap 7. The field continued to battle 2 and 3 wide for 4th place on back to 19th place, putting on a thrilling show for the fans! Andy Rutherford made his way up to second place, and began challenging Zordan for the lead. They battled side by side 5 laps until the red flag came out. Dave Simpson and Brad Hall tangled at the start finish line, with Hall’s car catching fire. He was able to climb out without incident. After going back to green, Andy Rutherford took over the lead with 5 to go, but Zordan tried to stay by his side, not giving up easily.  The action continued with Greg Brown and Kyle Ribble battling hard for 2nd place and charging around Zordan. Andy Rutherford was able to hold off the field taking home the win. Second place went to the fast qualifier Kyle Ribble who started 13th. Third through fifth finished as follows: Greg Brown, Josh Zordan and Keith Wilfong.

The Late Model Sportsman feature had a rough start with a car spinning coming to green. He collected Kenny Head and John Long in the accident. Head was able to continue on, but Long was forced to retire from the race. Curtis Holt and Dylan Stovall brought the field around for a second attempt at starting the feature. Denver Sweat, in his rookie season was able show the way, until veteran driver Buddy Head took over the lead.  As Buddy Head continued to extend his lead, his son Lane battled hard for second place with Keegan Dykstra and Austin Maynard. In the end, Buddy Head lead the field under the checkered flag. He was followed by his son Lane in second, Dykstra in third, Maynard in fourth and Kenny Head in fifth.

As the weather cooled, the racing action heated up with the Outlaw Super Late Models.  After taking the green, Rick Senneker had a hard hit into the turn one wall, bringing out a red flag. Three other cars were collected in the wreck. After an extensive clean up the race restarted. The field fought hard through the first thirty laps of the race. John Long was able to take over the lead and hold onto it for the win. Adam Terry fought his way from 9th place starting spot to finish second. Third place went to Doug True followed by Mark Shook and Todd Harrington.

The Outlaw Front Wheel drives returned to the track for their B feature, starting 8 cars. Jordan Hunderman piloted his son’s new FWD car, testing it out before letting his son race next week. He quickly jumped into the lead. He was soon challenged by Matt Searles for the lead. Searles spun, bringing out the caution and bunching up the field. Hunderman went on to win. He was followed by Matt McDonald and Doug Nelson.

Finishing up the night was the Zoo Stock B Feature. Leonard Diamond had the lead before battling with Don Porter who was able to hold the lead until Cole Roelofs took over. The yellow came out for Mike Bosch who had caught on fire.  Roelofs lead the field back to green with five laps remaining. The checkered flag waved for Roelofs. Second and third went to Don Teadt and Don Porter.