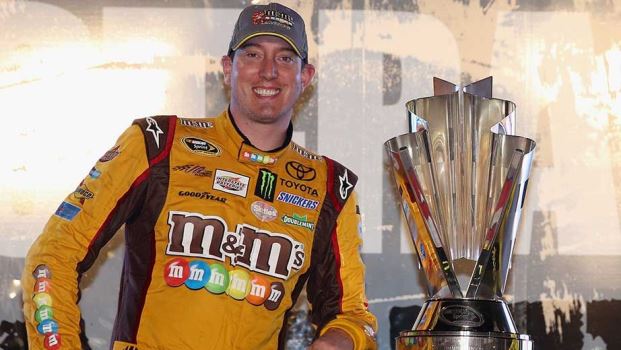 Kalamazoo Speedway is off to a fast start toward making Kalamazoo Klash XXV Presented by West Michigan Toyota Dealers one of the top short track events in the nation in 2017.  Former Monster Energy NASCAR Cup Series champion Kyle Busch will headline the Wednesday, August 9 event.

“I really enjoyed my experience at Kalamazoo Speedway a couple of years ago — the race track was a lot of fun and the fans were great, so I’m excited to be going back,” Busch told Speed51.com powered by JEGS.  “We were able to win the Super Late Model portion last time, but unfortunately our race ended early in the Klash due to an engine failure. Hopefully this time around we can pull of the double and win both events.”

“I am excited for the opportunity to work with Kyle Busch in a Senneker Performance Outlaw Car for the 2017 Kalamazoo Klash,” Senneker said.  “He is my son’s favorite driver, so I am even more excited for Reese to see he and I race against each other this summer.  Kyle brings yet another dynamic to the already talented field of drivers, and I am looking forward to the challenge.”

Before a single ticket has been sold, Kalamazoo Klash XXV Presented by West Michigan Toyota Dealers, is sure to be a sellout.   Track owner/promoter, Gary Howe, noted that having the West Michigan Toyota Dealers on board made it possible for the Speedway to host Busch for the 25th running of the Kalamazoo Klash quipping that Toyota’s tag line of “Let’s Go Places” is perfect for how the event is shaping up.

This will be Busch’s second appearance at the Kalamazoo Klash.  He previously picked up a win in the Super Late Model portion of the event in 2014.

It is not out of the ordinary for the Kalamazoo Klash to have a star-studded line up. The Klash has seen the likes of a young Matt Kenseth, Ken Schrader, Johnny Benson Jr. and more recently NASCAR Camping World Truck Series driver Matt Crafton.

Kalamazoo Klash XXV Presented by West Michigan Toyota Dealers is set to take place on August 9 at Kalamazoo Speedway based in Kalamazoo, Michigan

Information about how to purchase tickets and VIP wristbands for reserved seating, dinner and a private autograph session with Kyle Busch will be available in March with grandstand ticket sales beginning in April.  Suite rentals and large groups wanting to reserve a hospitality deck may be booked now by calling (269) 692-2423.