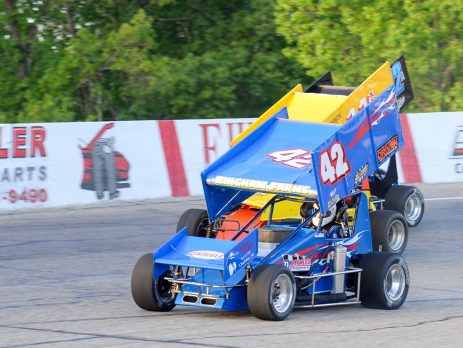 After setting quick time earlier in the evening Jason Essex started dead last in the eighteen car Outlaw FWD feature.  When the checkered flag flew however he was the first car under it, beating Pete Doxey by 1.053 second.  Nick Layman finished third ahead of Rick LaDuke and Kyle Jansen.  Will Slaughter led the second half of the top ten over Chris Harmon, John Munro, Gabe Carr and Kenny Wright.  Harmon and Munro won the heats.

Curtis Towne picked up the victory in the twenty lap Zoo Stock feature.  Colin Bozell finished a solid second beating out Logan Hiemstra, Jerry Ballard and Jesse Hard.  Michael Rozner wound up sixth, while Reilly Meade, Andy Sutton, Tony Mayhew and CJ French rounded out the top ten.  Keith Dixon was the fastest qualifier with a lap of 17.168 seconds.  Ballard, Buster Martin Jr. and Keegan Letts won the heat races while Adam Wilson picked up the victory in the ‘B’ feature.

After a week off, racing resumes Friday, June 15 with a full five in one show featuring the return of the Outlaw Super Late Models.  Also in action will be the Late Model Sportsman, Street Stocks, Outlaw FWD’s and Zoo Stocks.

Kalamazoo Speedway is the place to be in 2018 for fast, clean, family fun! Kalamazoo Speedway plays host to some of the best entertainment events in the state and welcomes corporate and family groups to our private decks and suites. Call 269-692-2423 Monday through Friday to learn more or visit www.kalamazoospeedway.com.