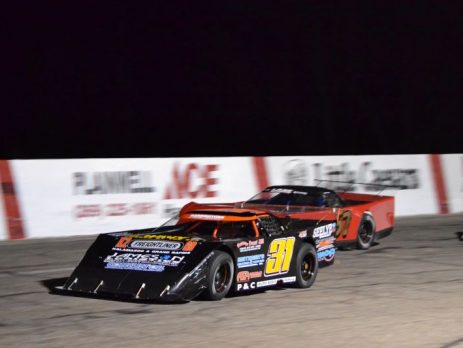 The 25 lap Zoo Stock feature had some trouble getting started but once they got a lap in the action was intense.  Rielly Meade held off Logan Hiemstra by just 0.298 seconds to pick up the victory.  Jorden Brinkert finished third beating out fast qualifier Grant Lofquist and former champion Brock Sweeter.  Justin Bozell led the second half of the top ten over Jared Blanchard, Matthew Elsey Jr., Charles Anderson and Ross Bergman.  Renae Letts picked up the win in the “B” Feature.

This Friday night, May 17 is Ben Beeler Memorial Trophy Night Presented by Send Out Cards.  The Outlaw Super Late Models will be back in action with defending champion Todd Harrington trying to go back to back.  Also in action will be the Late Model Sportsman, Street Stocks, Outlaw FWD’s and Zoo Stocks.