Buddy Head Wins @ the Zoo, Klash Up Next! 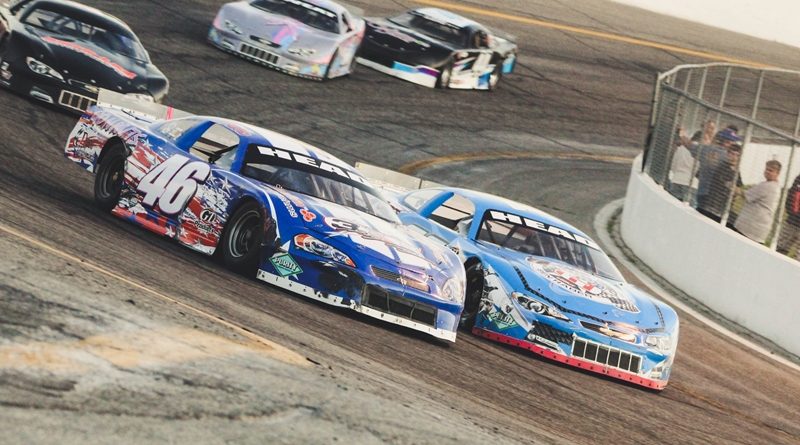 Buddy Head Wins @ the Zoo, Klash Up Next!

Ninety eight cars filled the pits, spread out in just four different divisions. The Outlaw Super Late Models had the week off, gearing up for the 26th annual Kalamazoo Klash which will take place on Wednesday August 8th. After qualifying was over, Keegan Dykstra found himself on top of the board in the Late Model Sportsman division. Kyle Ribble was quick time yet again in the Street Stocks. Pete Doxey continued to dominate the Outlaw Front Wheel Drive class and Logan Hiemstra picked up fast time in the Zoo Stocks.

The heat races kicked off with the Street Stock division; Tom Rutherford, Todd Hall and Justin Holden took home the heat race checkered flags. In the Zoo Stocks, Taylor Imus picked up her second heat race in this season, along with Nick Failing and Travis Petto.  In the Outlaw Front Wheel Drives, Gabe Carr and Drew Ketola won their heats.  Rounding out the heat races was the Late Model Sportsman division, with Matt Sullivan and Curtis Holt winning.

With Street Stocks paying $1,000 to win, we had enough drivers on hand needing a last chance race. After several cautions, and lots of racing action the top four drivers of Bob Miller, Todd Hall, Matt Elsey and Rob Hardy transferred.

A feature action kicked off with the Zoo Stocks. Nick Failing started on the pole, and jumped out to the lead. He had to forfeit the lead, due to breaking out of his qualifying time, giving it up to Tony LoBretto. LoBretto was the first of four lead changes, ending with Taylor Imus at the checkered flag. Week after week, she continued to improve, but she was finally able to make the trip to Victory Lane! She had to hold off a late race charge from Curtis Towne who ended up finishing second. Third place was Grant Lofquist followed by Camaron Barthel and Tony LoBretto.

The Outlaw Front Wheel Drive division started out coming to green 3-4 wide, two rows deep. Kyle Jansen held the early lead after the battle, only to have to pass through the pits for going over his qualifying time. Andrew Losey was able to take over the lead for a few laps. Pete Doxey was able to charge to another victory after starting in last place. Losey finished 2nd after started 14th.  Third place went to Jason Essex who also charged from the last starting row. Brock Sweeter and Ben Wilcox rounded out the top five.

A full field of Late Model Sportsman put on a show for the fans, running three wide for the first six laps of the race. An unfortunate pile up on the front stretch took out Kenny Head, Matt Sullivan and Jordan Hunderman. Several battles took place before the end of the race, bringing point leader Buddy Head to winners circle. He was followed by Keegan Dykstra who held off AJ Foote, Chaz Hook and Lane Head.

The main event of the night, a 35 lap Street Stock spectacular paying $1,000 to win roared onto the track. Josh Zordan and Brent Hook leading the 20 car field to the green. Brent Hook was able to pull away from the field by a straightaway. He continued to advance his lead, until the caution came out for a stalled car. This bunched up the field with Keith Wilfong who had worked his way from sixth to second. Kyle Ribble took over the lead three laps after going back to green. Ribble was able to continue on to win the large payday! Second place went to Zack Cook, followed by Keith Wilfong, Brent Hook and point’s leader Greg Brown.

The Zoo Stock B feature started off with a bang as Rent a Ride driver, Craig Overweg who had been flirting with the wall all evening, hit it. This brought out the red flag. After extensive clean up, the remainder of the race was able to run green to checkered. Brent Drobney was able to pass Joey Failing for the win. Failing ended up second with third place going to Rent a Ride driver, Chris Chenlo.

The biggest event on the 2018 schedule takes place this WEDNESDAY night with the running of Kalamazoo Klash XXVI Presented by GT Products.  The best Outlaw Super Late Model drivers on the planet will go 125 laps for $10,000 to win.  As if that wasn’t enough, the ARCA/CRA Super Series will also be in town for their own 125 lap event, paying $5,000 to win.  Racing starts at 7:00 on Wednesday.