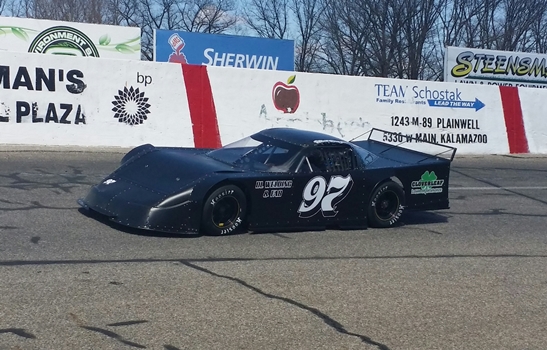 In the Super Stock division Eric McGlothlen was the fastest with a lap of 13.658 seconds. Chris Shannon was second quick ahead of former champion Kenny Head, Brandon Lyons and Tom Wright. Jon Beach was sixth quickest ahead of Rodney Smith, Austin Maynard, Gary Denzel and Mike Williams.

Former Mini Stock track champion Frank Stager was the quickest of the Mini Stocks with a lap of 14.644 seconds. Logan Knight was second quickest ahead of Brian Echtinaw, Andrew Brest and Donnie Brest.

The Outlaw Cyber Stocks hit the track for the first time with young Keegan Dykstra topping the charts with a lap at 15.961 seconds. Doug Nelson was second ahead of Jeremy Young, Alysa James and Drew Maxwell.

The debut of the Flip Flop Cyber Stocks saw Brad Hall as the quickest with a lap of 17.675 seconds. Brandy Emerson, Tiffany McConnaudghey, Lynne Zachary and Keith Ribble rounded out the top five.

Next Saturday, April 18 will be the second and final pre-season test of the season. Pit gates will open at noon with practice running from 1:00-5:00. Then on Saturday, April 25 the NASCAR Whelen All-American Series season will commence with Opening Night featuring the Intimidator 100 for the Outlaw Super Late Models. Super Stocks, Pro Stocks, Mini Stocks, Outlaw Cyber Stocks and Flip Flop Cyber Stocks will also be in action.