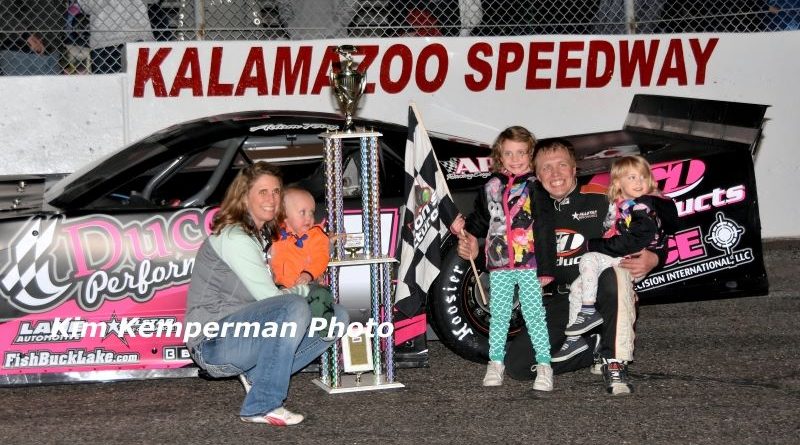 The 70th annual season opener at Kalamazoo Speedway saw over 150 cars in the five weekly classes, with 28 of them going for the title of being Intimidator 100 champion.  When the checkered flag flew it was Adam Terry in victory lane after emerging victorious from a fantastic late race duel with fast qualifier Tyler Roahrig.  Two-time champion Mark Shook finished third ahead of Doug True and 2011 champion Phil Bozell.  Andrew Brest led the second half of the top ten over JR Roahrig, defending champion Todd Harrington, 1995 Late Model Sportsman champion Billy Shannon and Monte Tolan.  Chad Poorman won the twenty-lap last chance race.

Although it is a new year it was the same story in the Street Stock class, as they put on a fantastic show.  Zack Cook started deep in the field and made several daring passes on his way to the lead and the eventual win in the thirty-five-lap opener.  Brandon Zachary ran an impressive second beating out three-time track champion Matt Corliss, fast qualifier Kyle Ribble and Shane Miller.  Danny Brown ran an impressive sixth ahead of Matt Elsey, Zoo Stock champion Colin Bozell, Heath Bronkema and Bug Schisler.  Notable finishers included defending champion Greg Brown, who finished a disappointing 17th.  Josh Highbaugh won the last chance race.

Adam VanAvery picked up the victory in the thirty-lap opener for the Outlaw FWD’s.  Corey Woods finished second ahead of Drew Losey, Wayne Stack and Johnny Carr.  Will Slaughter led the second half of the top ten over Camille Lewis, Dave Leonard Jr., Nick Layman and Jacob Brummett.  Gabe Carr was the fastest qualifier.

A wild Zoo Stock feature saw Jordan Brinkert walk away with the trophy.  Regan Powell was the runner-up beating out Kyle Knapp, Ross Bergman and Jared Blanchard.  Renae Letts finished a solid sixth while 2015 champion Brock Sweeter, Rielly Meade, TC Burgess and Jesse VanAvery Jr. rounded out the top ten.  Kenny Head II was the fastest qualifier while Wes Allen picked up the win in the ‘B’ Feature.

The Friday night action returns to the high banks of the Zoo as “Big Bucks Night” will feature a $1,000 to win event for the Late Model Sportsman division.  The Street Stocks will also go for $1,000 as will the visiting Midwest Compact Touring Series.  Last but not least the Zoo Stock division will run for $500 to win.