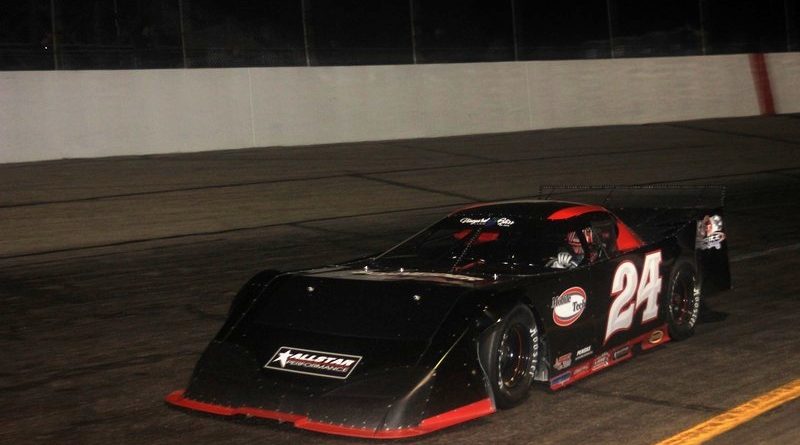 Fan favorite Keith Wilfong charged from deep in the field of 21 Pro Stocks to pick up the checkered flag.  Wilfong held off a late charge from Greg Brown, who set quick time earlier in the evening.  Zack Cook ran an impressive third ahead of Bob Miller and Kyle Ribble.  The second half of the top ten was led by Brad VanAvery over Barry Jenkins, Josh Zordan, Josh Roberts and Steve Smith.

Valerie Bozell set quick time, started dead last and almost drove the victory in the Flip Flop Cyber Stock feature but in the end was held off by a very impressive Nick Failing, who collected the opening night victory.  Bozell would have to settle for second ahead of Denver Sweat, Joe Failing and Tony LoBretto.  Kevin Seat finished sixth ahead of Renae Letts, Juliet Sweeter, Kyra Donald and Brandon Sweat.

This Friday, May 5 celebrate “Cinco de Mayo” with all of your friends at Kalamazoo Speedway!  There will be a full 5 in 1 NASCAR Racing Program featuring the NASCAR Whelen All-American Series Outlaw Super Late Models.  Also in action will be the Super Stocks, Pro Stocks, Outlaw Cyber Stocks and Flip Flip Cyber Stocks.  The night’s preliminary event will be the fan favorite “Australian Pursuit Races”.  Also it will be the first “Student Night” of the year where all students K-12 will be admitted for FREE!!  High school students will need to show their ID to be granted FREE admission.