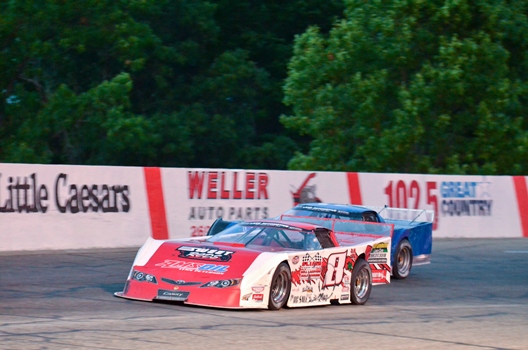 The Flip Flop Cyber Stocks vs. Burg Stocks battle brought a ton of cars and when the smoke cleared it was Mark Green picking up the victory.  Brent Drobny finished second ahead of Brad Hall, Joey Failing and Danny Payne.  The second half of the top ten was led by Henry Miller over Chet Losey, Nick Failing, Kevin England and Steve VanVleet.  Phil Page was the quickest qualifier while Green, Tony LoBretto, Ryan Cavey and Shane Miller won the heat races.  Mike Jeanette won the “B” Feature.

The sixth event of the Auto Value Bumper to Bumper Super Sprints presented by Royal Purple Synthetic Oil took place on Friday with defending series champion Aaron Pierce collecting his initial win of the season and seventh of his career.

Wheeling the DJ Racing entry, Sierra Jackson started on the pole and got loose on the initial start of the feature causing some tense moments as the field sorted itself out heading into the first turn. David Byrne jumped out to a commanding lead in the early stages of the feature. Jason Blonde, Aaron Pierce, Derek Snyder, Tyler Roahrig, Kyle Edwards, Ryan Litt, and Geoff Kaiser all battling it out trying to reel in the leader.

Pierce was able to erase the early distance to race leader Byrne and the two drivers put on a great battle for the lead in lapped traffic. On the 20th circuit, Byrne made contact with Tom Paterson and Byrne spun in turn 2 advancing Pierce to the top spot. As the checkered flag fell, Pierce finished 1.907 seconds ahead of Jackson. Third was Derek Snyder with Kyle Edwards and Ryan Litt rounding out the top five.

This Friday, July 22 action continues with a Full 5 in 1 NASCAR Racing Program featuring the NASCAR Whelen All-American Series Outlaw Super Late Models.  Also in action will be the Super Stocks, Pro Stocks, Outlaw Cyber Stock and Flip Flop Cyber Stocks.  It will also be the third Spectator Drag event of the season.  It is also Import Tuner Car Night.  Anyone driving an import tuner car will be allowed in for free and will be allowed to make some laps around the track during the intermission.