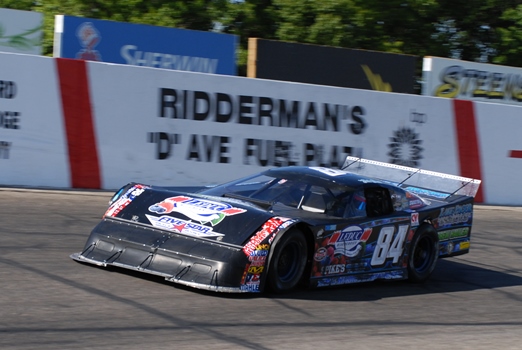 Over 100 cars packed the pit area Saturday night at Kalamazoo Speedway for “Double Trouble” night, which saw each division run two features during the evening. First up for the NASCAR Whelen All-American Series Outlaw Super Late Models was the 7UP 25, which saw John Long become the fifth different winner in the first five races of the season. Robbie Ferrier finished a close second ahead of Jeff Bozell, Brent Hook and fast qualifier Rick Senneker. Mark Shook led the second half of the top ten over two-time defending champion Mike “Bubba” Brooks, veteran Jack Landis, point leader AJ Foote and Brandon Zachary. Notable finishers in the 7UP 25 included Billy Shannon in 11th, Jerry Pierman in 16th and Matt Frazier in 19th.

With one feature already under their belts, next up for the Outlaw Super Late Models was the Whelen 25. Mike “Bubba” Brooks held off a hard charging Rick Senneker over the closing laps to become the first repeat winner of the season in the division. 7UP 25 winner John Long finished third ahead of Jeff Bozell and Mark Shook. AJ Foote finished a solid sixth beating out Robbie Ferrier, Billy Shannon, Jack Landis and Brent Hook. Notable finishers in the Whelen 25 included Matt Frazier in 13th and Jerry Pierman in 20th. Foote continues to lead the standings heading into this Saturday’s Lane 75. His advantage is just 15 points over Mark Shook. Brooks (-19), Shannon (-29) and Bozell (-45) round out the top five.

Seventeen Super Stocks made the call for double feature night with defending champion Buddy Head setting quick time in qualifying and then driving through the field to pick up the victory in the first feature. Chris Shannon ran an impressive second ahead of Brandon Lyons, Kenny Head and Nick Pressler. Rodney Smith finished a solid sixth beating out David Guarino, Tom Wright, Jim Leonard and Dave Leonard.

In the second feature former champion Greg Haynes returned to his winning ways, making a three wide pass for the lead and then holding on to pick up the victory. Matt Corliss finished second ahead of Wil Raber, Brent Hook and Barry Jenkins. Danny Oxford led the second half of the top ten over Josh Highbaugh, Mark Campbell, Greg Brown and Dave Hopwood. Notable finishers from the second feature included Keith Wilfong in 12th, Chaz Hook in 13th and John Foote Jr. in 14th. Corliss now holds an 85 point lead over Brent Hook with Brown 151 points back in third.

The Outlaw Cyber Stocks had two, twelve lap features on the schedule for Saturday night. Bon Miller emerged with the checkered flag in the first feature, holding off fast qualifier Keegan Dykstra for the victory. Nick Layman finished third ahead of Dan Rigoni and DJ Oxford. The second half of the top ten was led by Larry Richardson over Kyle Jansen, Jeremy Young, Josh Roberts and Brian Gregersen.

The second Flip Flop feature saw Pete Doxey do what no other driver could do on Saturday night by picking up the victory in both features. Darren Cox finished second ahead on Jon Schuyler, Keith Ribble and Brad Hall. Darren LaDuke ended up sixth beating out Brock Sweeter, Dwight Anderson, Joey Failing and Calvin Foote. Hall now leads the points by a mere two points over Sweeter, with Ribble just 63 points back in third.

This Saturday night, June 27 will see another full 6 in 1 show return to the Zoo highlighted by the NASCAR Whelen All-American Series Outlaw Super Late Models running the Lane 75. This race will pay $1,500 to the winner and should see some out of towners come in to try and take the money home. AJ Foote will put his slim fifteen point lead on the line over Mark Shook, Mike “Bubba” Brooks, Billy Shannon, Jeff Bozell and the rest of the field. Also in action will be the Super Stocks, Pro Stocks, Mini Stocks, Outlaw Cyber Stocks and Flip Flop Cyber Stocks.