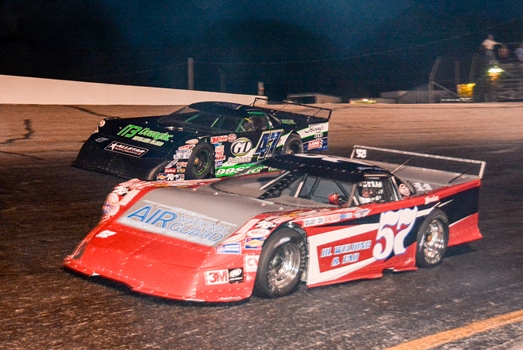 Keegan Dykstra made a late race pass on fast qualifier Dan Rigoni to collect the victory in the twenty lap Outlaw Cyber Stock feature. Dale Leonard finished third ahead of Nick Layman and Bob Miller. The second half of the top ten was led by Larry Richardson over Brian Gregersen, Alysa James, Daelynn Post and Josh Roberts. Dykstra and Richardson collected the two heat race wins.

This Saturday, August 8 the battle for the NASCAR Whelen All-American Series Outlaw Super Late Model championship continues with the running of the 92.5 the ZUU Showdown. Mark Shook, Mike “Bubba” Brooks, Jeff Bozell and Billy Shannon all sit within just 53 points with four weeks of point racing left to go. It will also be the last chance for drivers to tune-up for next Wednesday’s 23rd annual Kalamazoo Klash Presented by Boyne Machine and Enterprise Iron & Metal. Also in action this Saturday will be the Super Stocks, Pro Stocks, Mini Stocks, Outlaw Cyber Stocks (running the $300 to win Outlaw Cyber Mania Presented by Cool 101) and Flip Flop Cyber Stocks.