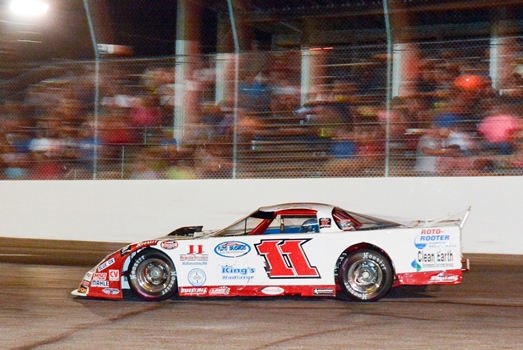 TONIGHT, April 29 the 2016 Kalamazoo Speedway season kicks off with a full 6 in 1 show featuring the Intimidator 100 for the NASCAR Whelen All-American Series Outlaw Super Late Models.  Super Stocks, Pro Stocks, the Southwest Michigan Mini Stock Challenge Series, Outlaw Cyber Stocks and Flip Flop Cyber Stocks will also be in action.  Despite the huge switch to Friday nights, fans will be greeted with several other upgrades when they arrive Friday including the new “Zoo Grill” located in the midway with an excellent new menu, a larger family section with no smoking or alcohol for families to enjoy themselves, a new “teen zone” where teens can hang out and interact together, the return of PEPSI products to the track by popular demand and much, much more.  One lucky fan will also win a FREE Rent-a-Ride to be used during the 2016 racing season!  Also fans, make sure to keep your ticket stubs from the season opener as we will be giving away a Flat Screen TV next Friday, May 6th.  Your ticket numbers from this week will transfer to the TV giveaway on May 6th, so make sure you have your ticket stub from the season opener with you!!

25 Outlaw Super Late Model drivers have taken part in the three pre-season test sessions and in addition to the list Brian Bergakker, Cory Ryman, Doug True and others are expected to attempt to be part of the 16 fastest qualifiers to lock into tonight’s Intimidator 100.  The new qualifying format will see Outlaw Super Late Model drivers get 18 minutes of open track time to try and post their best lap.  The last few minutes of this session could be some of the most exciting qualifying action Kalamazoo Speedway fans have ever witnessed as drivers near the bubble try to lay down the perfect lap to get themselves into the show.  If they don’t lock into the top 16, drivers will get one final opportunity to start the big race with a 20 lap last chance race.  This race will see the top four drivers move on to the main event.  Those 20 drivers will then battle it out for 100 laps with the winner taking home the $2,000 top prize!  Driver expected to contend for the victory include three time defending track champion Mike “Bubba” Brooks, Mark Shook (fastest in Wednesday’s final test session), Jeff Bozell, defending Kalamazoo Klash winner Jeff Ganus, 2011 champion Phil Bozell, 2012 champion Brian Bergakker, Tyler Roahrig (fastest in the first pre-season test), JR Roahrig, Tom Thomas and 12-time Outlaw Super Late Model champion Andy Bozell.

In addition to the Intimidator, five other divisions kick off their season tonight at the Zoo also.  In the Super Stock division defending champion Buddy Head looks to kick off the season with a bang but will have challenges coming from brother Kenny Head, Brandon Lyons, Rodney Smith and more.  A last chance race is also expected in the Pro Stock division where veteran driver Mike Zordan makes his return to the driver’s seat to challenge Wil Raber, Barry Jenkins, Greg Brown and many more for the season long championship.  The Southwest Michigan Mini Stock Challenge Series will run their first ever event tonight with drivers like Andrew Brest, Doug Gallandt, Kyle Shannon, Ryan Stutz, Sean Elkins expected to challenge along with 2009 Pro Stock champion Matt Noble.  In the Outlaw Cyber Stocks Dan Rigoni seems to be the pre-season favorite but will definitely have to hold off Nick Layman, Larry Richardson, Heath Bronkema and Ricky LaDuke. Finally the Flip Flop Cyber Stocks are expected to produce a whole new crop of talent, led by Lane Head and Valerie Bozell.

Gates will open at 4:30, with group qualifying starting at 5:45 and races starting at 7:30.  Don’t miss the beginning of a new Friday night tradition as Kalamazoo Speedway kicks off the 2016 season in style tonight!  For more information visit www.kalamazoospeedway.com.