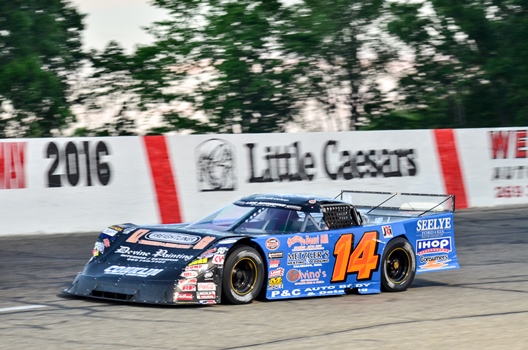 As part of an ongoing effort to work with other promoters and racetracks, Kalamazoo Speedway officials have announced the dates for two premier Outlaw Super Late Model events for the 2017 season.

The second annual Gary Terry “Follow Your Dreams” 125 hopes to build off the success of the inaugural event and will be run on Wednesday, June 14, 2017.  The 2016 event drew over 30 of the top Outlaw Super Late Model teams in the Midwest and saw Tyler Roahrig emerge as the victor.  “I don’t even know what to say. I feel so honored to win this race,” Roahrig said in victory lane.  “The field of cars here, I couldn’t think of a better field. It’s the first time I’ve ever beat the 37 (Terry Senneker) here, just doing that is a feat itself. I’m so thankful for Gary. The entire Terry family I’ve known them ever since I can remember. I’m so proud to do this for them, they’ve been friends with me and my family. I’ve never met someone they weren’t friends with. I’m so proud to win this right now.”

In addition to the June event, 2017 marks the 25th consecutive year of the Kalamazoo Klash.  The Klash has become known as the number one Outlaw Super Late Model event in the country.  It was recently named one of the top five short track races in the country by Speedway Illustrated Magazine.  The 25th annual event will take place on Wednesday, August 9, 2017.  To commemorate the 25th running of the Klash, plans are underway to make this the most memorable and biggest event in the history of the track.

“This announcement should come as a statement that Kalamazoo Speedway continues to support Outlaw Super Late Model racing”, track owner/promoter Gary Howe said.  “While many other specials have fallen by the wayside we have committed to put on not just one, but two of the premier Outlaw Super Late Model races in the country each season.  We still have the Klash as well as half of our 2016 season left but we are already hard at work to make sure 2017 is even stronger.  The success of the inaugural Gary Terry “Follow Your Dreams” 125 has us very excited about the future of that event and we are also very excited about the 25th anniversary of the Kalamazoo Klash.  Unfortunately not many events make it to 25 years.  It is a testament to our wonderful fans and competitors who have supported the event year in and year out.”

Kalamazoo Speedway is the place to be in 2016 for fast, clean, family fun! Pick up a copy of the schedule at the ticket office or look it up at www.kalamazoospeedway.com. Kalamazoo Speedway plays host to some of the best entertainment events in the state and welcomes corporate groups, family outings and suite rentals. Call 269-692-2423 Monday through Friday to learn more or visit the Kalamazoo Speedway website.