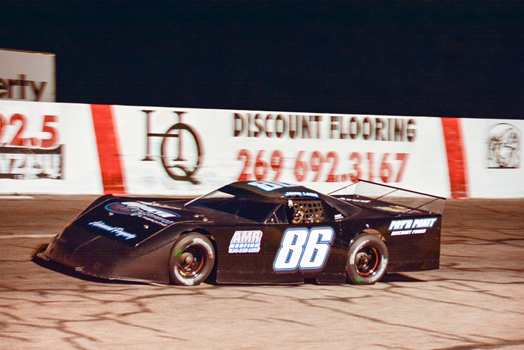 John Long made an impressive run through the field and then held off two-time defending champion Mike “Bubba” Brooks on a late race double-file restart to collect the victory in the Hoosier 50 for the NASCAR Whelen All-American Series Outlaw Super Late Models Saturday night at Kalamazoo Speedway. Brooks held on to finish second ahead of Mark Shook, Billy Shannon and fast qualifier Jeff Bozell. Dave Lober led the second half of the top ten over Matt Frazier, Tom Rutherford, Rick Senneker and Jeff Carper. Brandon Zachary and Travis Hall collected the heat race victories.

Dan Rigoni started the night by having to borrow a car to qualify and ended the night in victory lane in the Outlaw Cyber Stock division. Rigoni got his car fixed for the feature and had to start dead last. He then methodically worked his way through traffic and picked up the win in the fifteen lap feature. Scott Custer finished second beating out Nick Layman, Jeremy Young and Dale Leonard. Bob Miller finished sixth ahead of Larry Richardson, Daelynn Post, Alysa James and Josh Roberts. Keegan Dykstra set quick time while Roberts and Richardson won the heats.

This Saturday night, August 1 will see all six weekly divisions return to the Zoo. The Cool 101 Shootout for the NASCAR Whelen All-American Series Outlaw Super Late Models will be the featured event. The Super Stocks will run the Allstar Performance Showdown as well. The Pro Stocks, Mini Stocks, Outlaw Cyber Stocks and Flip Flop Cyber Stocks will complete the program.