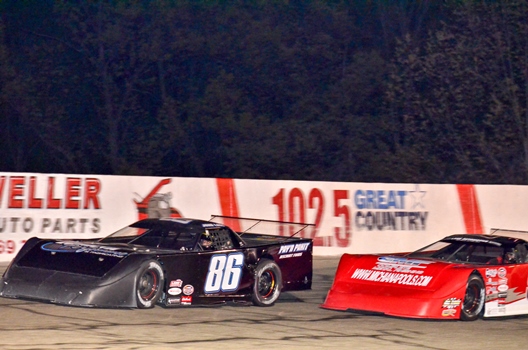 A great field of Pro Stocks invaded the Zoo and saw arguably the most impressive driving display of the night as Greg Brown set quick time and drove from deep in the field to pick up the victory in the thirty lap feature.  Defending champion Matt Corliss finished second ahead of two-time track champion Mike Zordan, Keith Wilfong and Jeff Wolfersberger.  Kyle Ribble finished sixth beating out two-time track champion Ben Raber, Toby Montgomery, Danny Oxford and Mark Fliearman.  Notable finishers included Barry Jenkins, who finished 13th.  Brown also won his heat, making it a perfect 160 point event for him.  The other two heats were won by Wolfersberger and Brad Hall.  Josh Roberts won the last chance race. Corliss still leads the points but his lead is now just 37 markers over Brown with Wilfong (-50), Montgomery (-103) and Jenkins (-113) also in striking distance.

Dan Rigoni continued his impressive 2016 season as he set quick time and started dead last in the Outlaw Cyber Stock division before racing through the entire field and picking up the win.  Rick LaDuke was the runner-up ahead of Doug Nelson, Brian Gregersen and Danny Rigoni.  2015 Flip Flop Cyber Stock champion Brock Sweeter finished sixth beating out Ryan Hufford, Dennis Letts, Larry Richardson and Nick Layman.  Sweeter and LaDuke picked up the heat race victories.  With another impressive performance Dan Rigoni continues to lead the points over Gregersen (-64), Nelson (-104), Sweeter (-111) and Hufford (-125).

This Friday night Kalamazoo Speedway opens up Memorial Day weekend with a big 6 in 1 show featuring the Lane 75 for the NASCAR Whelen All-American Series Outlaw Super Late Models.  Through three races the division has seen three different winners and with the Gary Terry “Follow Your Dreams” 125 just a couple weeks ago several heavy hitters are expected to “tune-up” this Friday night.  The Super Stocks and Pro Stocks are expected to continue putting on great races as well with Buddy Head and Greg Brown looking to carry momentum over to this week.  Friday will also see the return of the Southwest Michigan Mini Stock Challenge Series for the first time since opening night.  The Outlaw Cyber Stocks and Flip Flop Cyber Stocks will also be in action.  Also at 7:00 down on the front stretch will be the first kids bicycle and big wheel races of the season.  Also, NHRA Top Fuel Dragster driver Terry McMillen will be signing autographs, mingling with the fans and possibly even driving a Flip Flop Cyber Stock!  Finally, the night will conclude with the first fireworks display of 2016!