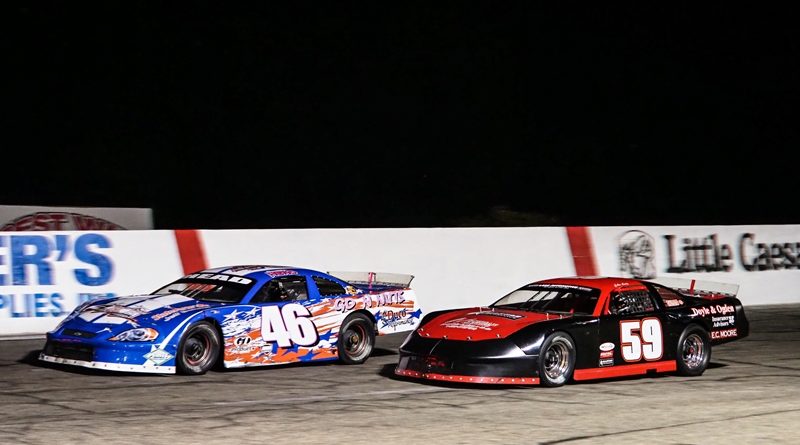 Kevin Sweat won the last chance race for the Street Stocks, transferring to the A feature. Also transferring were Adam VanAvery, Matt Elsey and Danny Oxford. In the Late Model Sportsman division the winner was Brandon Zachary. He was followed by Louis Miller, Bob Bliss and Jordan Hunderman, who all transferred to the A feature.

The unpredictable Zoo Stocks started out the feature events. With three and four wide several rows deep, they were bound to have a few cautions. Mason May started on the pole and took an early lead, holding it for six laps until Jerry Ballard came up from 6th to lead. Ballard didn’t have the lead for long. Dave Miller charged up from 16th and final starting position, going on to win their A feature. Second place went to Rilley Meade with a last lap pass coming to the checkered flag. Ballard finished 3rd with Jessie VanAvery Jr. in fourth and Mason May finishing fifth.

The Outlaw Front Wheel Drive division had a wild feature full of three and four wide racing. John Munro started third, but was able to jump right to the front as the green flag waved before breaking out only five laps into the feature, giving Ryan Hamm the lead. With only four laps to go, leader Jason Essex and 2nd place Pete Doxey had a tough break, both heading into the pits, creating a lucky break for Hamm, who picked up the feature win, followed by Ricky LaDuke. Brock Sweeter finished 3rd with Doug Smith and Kyle Jansen rounding out the top five.

Next up, more Zoo Stock action rolled onto the track with 11 cars starting the B feature. Jonathan Tysen started last, bumping and banging his way to the front to take home the win. Blake Piper came in second from 6th starting spot. Don Porter made his way from 10th starting spot to finish third.

More front wheel drive racing continued with the B feature for the Outlaw FWD division. Alex James picked up the feature win. Second and Third place went to Camille Lewis and Madilyn Blanch.

Back to rear wheel drive racing; 20 Street Stocks drivers hit the track for their 35 lap feature, all trying to take home the coveted $1,000 payday! Tom Rutherford and Chaz Hook showed the way for the first laps with the real battle being for 4th-11th place positions.  Kyle Ribble was able to add his name to the list of front runners, battling with Rutherford. With ten laps to go, Rutherford cut down a tire, forcing him into the pits and giving Ribble the lead. Ribble was able to hold the field off to take home the feature win. He was followed by Greg Brown, Toby Montgomery, Zack Cook and Chaz Hook.

This Friday night the action continues with a full five in one show featuring the return of the ultra-fast Outlaw Super Late Models.  The always competitive Late Model Sportsman and Street Stocks will also be back as will the Midwest Compact Touring Series, making their second visit of the season.  The always entertaining Zoo Stocks will round out the five division program.

Then on Sunday the one and only Enduro of the 2018 season will take place as the Michiana State Line Enduro Series visits the Zoo.  In addition to the 200 lapper fans will also see a $500 to win trailer race and a $250 to win spectator drags event.  The gates will open at 1:00 and the on track action starts at 4:00.