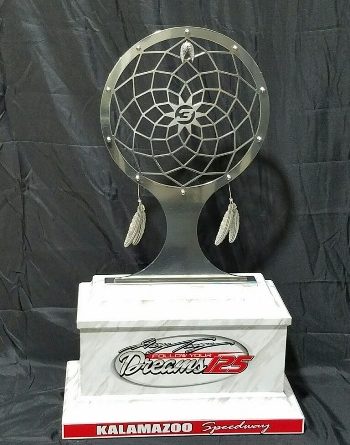 Kalamazoo, Michigan.  Wednesday, June 8 marks the inaugural Gary Terry “Follow Your Dreams” 125 Presented by Quick Fuel Technology for the Outlaw Super Late Models at the Kalamazoo Speedway.  Forty late model drivers are expected to compete for the $5,003 winner’s purse.  Joining the Late Models will be an expected 30 Pro/Street Stocks for a 50 lap feature.  “B” features will be run for both divisions.  Racing starts at 7:00 PM.  Practice begins at 2:00 followed by qualifying at 4:00.  Fans are invited to mingle amongst the cars and drivers beginning at 5:30 to take photos and get autographs.

The public is invited to a 6:00 – 9:00 PM practice session on Tuesday, June 7.  Admission is through a donation of 2 canned goods.  Donations will be directed to local food banks.

Not only are drivers coming from several states to compete for the purse and the trophy, they are also coming out of respect for Gary Terry; to honor a one of their own.  Last April, Terry died in a tragic accident while providing instruction to a driver at the Richard Petty Driving Experience at Walt Disney World in Florida.

Terry started his racing career at age six with the Quarter Midgets of America, winning a quarter midget national championship in Huntsville, Alabama at the age of 7.

He also made starts in the ARCA/CRA Super Series and former ASA National Series and then moved south competing in the old NASCAR AutoZone Elite Division Southeast Series.  His love of racing and people in general led him to the Richard Petty Racing Experience where he became the operations manager.

While Terry raced at other tracks, the Kalamazoo Speedway was his home track, says Gary Howe, track owner and promoter. “He was a fantastic person,” said Howe. “He was one of the nicest guys you’d ever want to meet.  He loved life, he loved talking to people, joking, kidding around. He was one of those guys you want to be a part of your track.  He was not just a good, fast, or hard racer, but a good man, part of a great family and a positive ambassador for the sport.”

Terry would have been 38 next week and is survived by his loving family including his wife, Kathy and their 3 year old daughter Taylor.