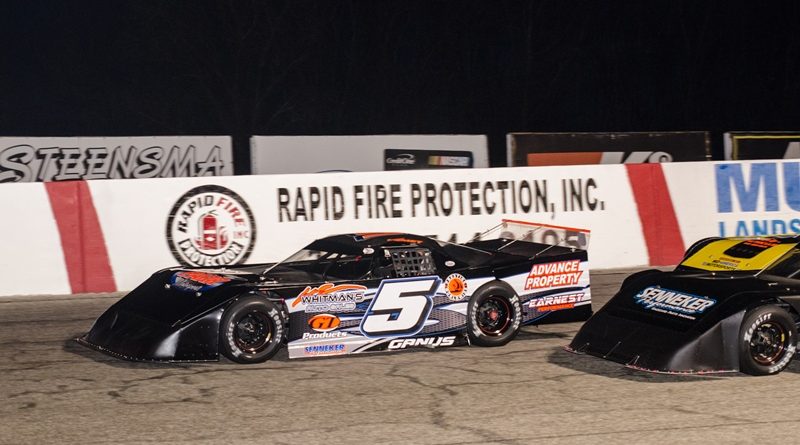 The night kicked off with the remaining 78 laps of the Intimidator 100 from opening night. Andy Bozell and Jeff Ganus brought the field around to green. Jeff Ganus quickly jumped out to the lead. He quickly came around the tail of the field and started working his way through lap traffic. After three cautions for three single car spin outs, Jeff Ganus brought home the payday. He was followed by Andy Bozell, Brian Bergakker, Phil Bozell and Brandon Lyons.

Rolling out for the 2nd feature of the night was the B stock feature for the Outlaw Front Wheel Drive division. After 15 quick laps for 13 cars, Jeremy Young’s bad luck for the season turned around with a win. Kenny Wright, arriving late and not qualifying made it up to second. Camille Lewis, Kevin Kruk and Collin Whitfiled rounded out the top five. Rookie driver Gabe Carr finished 6th in his first week post-graduation from the Zoo Stock division.

Zoo Stock “A” feature rolled out next, with the return of the unpredictable Rent-a-Rides. Cody Yeager, Rent-a-Ride driver and rookie Taylor Imus brought the field to green. Michael Rozner made his way from fifth starting position to hold the lead for the first portion of the race. He was over taken by Ira Hosner, who didn’t hold the lead for long. Ed Clawson pulled into the lead after a four car battle for several laps. The only restart found Collin Bozell and Logan Heimstra battling for the lead, only to have Ed Clawson take back over the lead. He went on to win followed by Heimstra and Bozell. Curtis Towne and Bryan Sawyer rounded out the top 5.

Ten cars headed into the Outlaw Super Late Model last chance race, all trying to make the Lane 75 main event, but only four cars would advance. Andrew Brest lead pulled into an early lead from the outside pole. He went on to win. Also transferring were Jeff Bozell, Chris Garrett and Matt Corliss.

Sixteen Outlaw Front Wheel drive cars took to the track for their 20 lap main event. Nick Layman and John Munro traded the lead back and forth for the first 12 laps. Pete Doxey used those 12 laps to charge from the 15th starting spot to take over the lead. He went on to win the feature event followed by Doug Smith, John Munro, Drew Losey and Dave Leonard Sr.

The action packed Street Stocks took off next for their feature event. John Chapman, Danny Oxford and Shane Miller were the three leaders of the race. The real battle was between 2nd and 5th positions for about ten laps until the racing hard battle turned into a tough break for Rob Hardy, going hard into the inside wall. Miller took home the checkered flag after starting in the 11th position. Danny Oxford finished 2nd followed by Keith Wilfong who started 12th and dodged his way around wrecks to finish.  Fourth and Fifth positions went to Brad VanAvery and Greg Brown.

Now for the much anticipated second feature for the Outlaw Super Late Models, the Lane 75. Matt Frazier held onto the early lead until being overtaken by Jeff Ganus on lap 37. Just four laps later, oil was laid down on the track, collecting Adam Terry, Phil Bozell and Mark Shook. Terry and Shook were able to continue, but it was a tough break for 4th place Phil Bozell as he went back to the pits on a hook. Frazier and Ganus brought the field back to green with Ganus taking over the lead, from the 12th starting spot. Jeff Ganus went on to take home the 2nd big payday of the night. He beat out the quick time qualifier of Brian Bergakker who started 13th and finished 2nd. Third place went to Steve Needles with Todd Harrington finishing fourth. Andy Bozell made his way up to a 5th place finish after an early caution and pit stop.

The Rent-a-Rides were back in action during the Zoo Stocks B feature. Austin Holbert piloted his Rent-a-Ride to a feature win. He came from the 7th starting spot. Keith Watson finished second followed by Mark Stewart, Don Teadt and Terry McMillen.

This Friday night, June 1 the Auto Value Bumper to Bumper Winged Super Sprint Series invades the Kalamazoo Speedway for their only visit of 2018.  Also in action will be the Late Model Sportsman, Street Stocks, Outlaw FWD’s and Zoo Stocks.