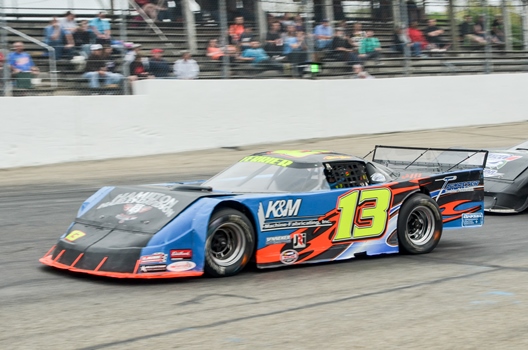 Sunday, May 24 the Four Cylinder Enduro Series kicks off the 2015 season with the running of the Veterans 200 Presented by Little Caesars. The action packed evening will be kicked off with the fan favorite Spectator Drags and will conclude with the always entertaining Powder Puff race. Pit Gates will open at 2:00, general admission gates will open at 4:00 and the event will start at 7:00.

Next Saturday, May 30 will see yet another full 6 in 1 show featuring the Weller Auto Parts 40 for the NASCAR Whelen All-American Series Outlaw Super Late Models. Billy Shannon brings will put his slim five point lead on the line over AJ Foote, Mark Shook, Mike “Bubba” Brooks, Jeff Bozell and the others. The Outlaw Super Late Models and Super Stocks will both be looking for their fourth different winner in as many races. The Pro Stocks and Mini Stocks will also be in action, as will the Outlaw Cyber Stocks, who will be running the $300 to win “Goat Roper 25 Presented by Hoosier Tire”. The Flip Flop Cyber Stocks will complete the program.