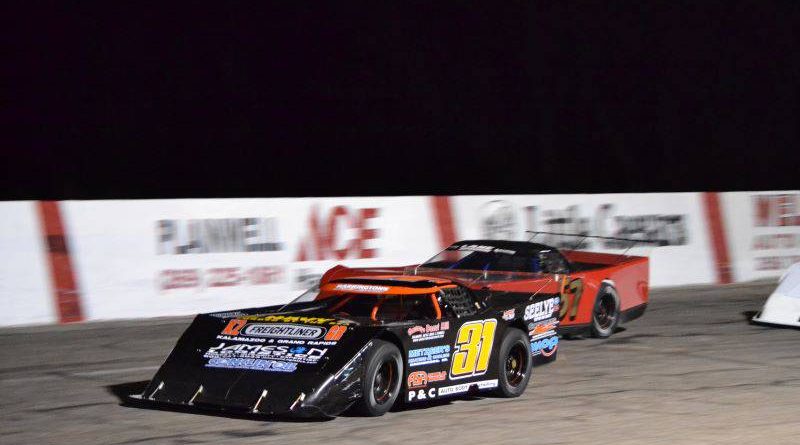 Corey Woods picked up the victory in the twenty-five-lap feature for the Outlaw FWD division.  Paul Bittle was the runner-up finishing ahead of Adam VanAvery, Pete Doxey and John Munro.  2015 Zoo Stock champion Brock Sweeter wound up sixth beating out Camille Lewis, Ben Wilcox, Drew Losey and Robby Siegel.  Notable finishers included John Carr, who finished 12th and Mike Long, who came home a disappointing 19th.  Gabe Carr was the fastest qualifier and won his heat race, which VanAvery picked up the win in the other heat.  Woods now leads the points by 44 over VanAvery, with Losey (-105), Munro (-113) and Mike Long (-119) rounding out the top five.

The Auto Value Non-Winged Super Sprint Series was also in town for their first of two visits in 2019.  Fast qualifier Aaron Pierce defeated Tyler Roahrig in a photo finish to collect the thrilling victory.  Kyle O’Gara finished third ahead of Bobby Santos and Russ Gamester.  Derek Snyder came home sixth while Taylor Ferns, Doug Dietsch, Teddy Alberts and Christian Koehler rounded out the top ten.  O’Gara and Roahrig collected the heat race victories.  The series will return to Kalamazoo on Friday, July 26 for their final visit of the season.

This Friday night, June 21 will see a full five in one show featuring the Outlaw Super Late Models.  Andrew Brest now holds a slim lead in the point standings and will try to increase that lead while Todd Harrington, Adam Terry, Doug True and the rest of the field will be trying to take it away.  The Late Model Sportsman, Street Stocks, Outlaw FWD’s and Zoo Stocks will also be in action.