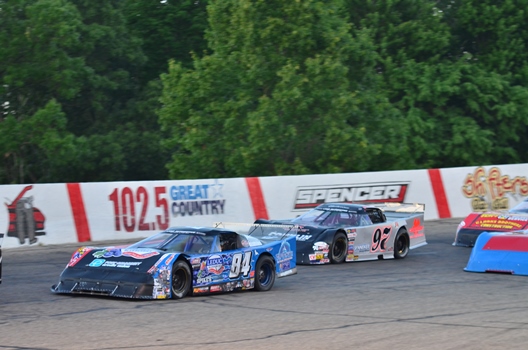 Kalamazoo Speedway fans have come to expect the Pro Stocks to put on a fantastic show every week and once again they did not disappoint.  Point leader Greg Brown emerged victorious after another great thirty lap feature.  Brown beat fast qualifier Matt Corliss, Kyle Ribble, three-time champion Greg Haynes and young Chaz Hook.  Bob Miller finished sixth ahead of Danny Oxford, Josh Roberts, Keith Wilfong and Shane Miller.  Notable finishers included Barry Jenkins, who finished 11th.  Brown and Wilfong won the heat races.  In a battle that promises to go down to the last lap of the season Brown now holds a slim 3 point lead over Corliss, with Wilfong only 88 points back in third.

After being upset just a week ago Dan Rigoni pulled back into victory lane after winning the twenty lap Outlaw Cyber Stock feature Friday night.  Rigoni set quick time earlier in the evening and worked his way from dead last on the grid all the way to the front.  Last week’s winner Nick Layman finished an impressive second ahead of 2010 champion Dale Leonard, Ricky LaDuke and Brian Gregersen.  Young Mason Dykstra led the second half of the top ten over 2015 Flip Flop Cyber Stock champion Brock Sweeter, Jeremy Young, Pete Doxey and Doug Nelson.  Gregersen and Leonard won the heats.

This Friday night, July 1 promises to be one of the biggest event at the track all season as Kalamazoo Speedway presents the first ever “Night of Doom”.  Modeled after the fan favorite “Night of Destruction” this will be a night of thrills and spills that no fan should miss!  The evening will feature several events including Motorcycle Stunts, Spectator Trucks/SUV Drags, a Water Barrel Race, a Trailer Race, a Rollover Contest, an Enduro-Cross Event,  a Push Car Race, Monster Trucks, a Compact Demo Derby and of course the fan favorite Bus Races.  On top of all that the evening will begin with Monster Truck & Bus Rides for the fans and will conclude with the biggest Fireworks extravaganza in Kalamazoo Speedway history!!