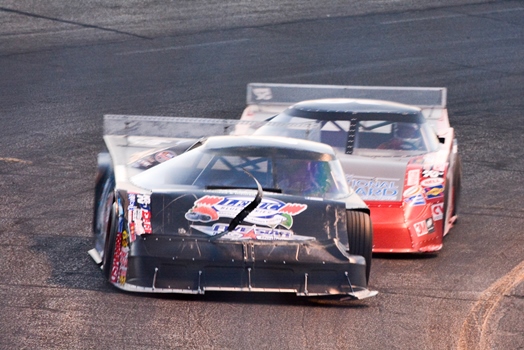 Dan Rigoni ran a qualifying lap of 15.758 seconds, which put him on top of the board when qualifying concluded. It also earned Rigoni the last starting spot for the twenty lap feature. Dan methodically worked his way through traffic and collected the victory and the $300 check for winning the “Goat Roper 20 Presented by Hoosier Tire”. Nick Layman finished a solid second ahead of young Keegan Dykstra, Larry Richardson and DJ Oxford. Two-time defending Outlaw Super Late Model champion Mike “Bubba” Brooks finished sixth ahead of Brian Gregersen, Josh Roberts, Daelynn Post and Jeremy Young. Gregersen and Dykstra won the heats.

The Flip Flop Cyber Stocks ran their fifteen lap feature in the wrong direction for the first time this season and put on a great show for the crowd. “Rent-a-Ride” driver Steve Helmer emerged as the victor holding off a hard charging Brock Sweeter. Jonathon Schulyer finished third ahead of Jennifer Baughman and Lynne Zachary. Brooke Derrick finished a solid sixth beating out Brad Hall, Joey Failing, John Lawrence and fast qualifier Keith Ribble. Helmer and Hall won the heats.

The Auto Value Bumper to Bumper Super Sprint Series put on a great fifty lap main event with Kyle Edwards holding off fast qualifier Aaron Pierce for the win. Jason Blonde finished third ahead of Bobby Santos and Ryan Gillenwater. The second half of the top ten was led by Derek Snyder over Kevin Feeney, Cody Gallogly, John Turnbull and Mike Stutsman. Edwards and Turnbull won the heat races.

Kalamazoo Speedway will now take a week off before coming back with a bang on Saturday, June 20. The night will feature double features for all six divisions! That’s right for just a $12 ticket fans will be able to see 12 feature races! The NASCAR Whelen All-American Series Outlaw Super Late Models will be the headliners, running the Whelen 25 and 7UP 25. Super Stocks, Pro Stocks, Mini Stocks, Outlaw Cyber Stocks and Flip Flop Cyber Stocks will also double up.