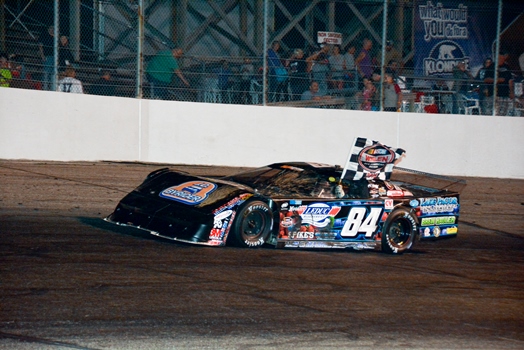 Two-time defending Outlaw Super Late Model champion Mike “Bubba” Brooks charged from deep in the field, took the lead and then held off Jeff Bozell on a late race double file restart to collect the victory in the 7UP Shootout Saturday night at Kalamazoo Speedway. Bozell held on to finish second ahead of Todd Currier, Matt Frazier and point leader Mark Shook. Brandon Zachary led the second half of the top ten over Dave Simpson, Tom Rutherford, Billy Shannon and Dave Lober. Rick Senneker was fast time with a lap of 12.855 seconds. The win by Brooks now puts him just nine points behind Shook with just two events left in the season. Bozell (-38) and Shannon (-86) also are still in championship contention, should the top two falter.

Despite having to start dead last, young Keegan Dykstra picked up the victory in the twenty lap Outlaw Cyber Stock feature, making the winning pass on Nick Layman late in the race. Layman held on for second ahead of Larry Richardson, Dale Leonard and Kyle Jansen. The second half of the top ten was led by Bob Miller over Brian Gregersen, Scott Custer, Josh Roberts and Alysa James.

This Saturday, August 29 Kalamazoo Speedway will host the penultimate round in the 2015 season with a full 6 in 1 show featuring the Little Caesars 50 for the NASCAR Whelen All-American Series Outlaw Super Late Model. Four drivers now sit within just 86 points, while two-time defending champion Mike “Bubba” Brooks is now just nine points behind Mark Shook for the lead. All five support divisions will also be on hand including the Super Stocks, Pro Stocks, Mini Stocks, Outlaw Cyber Stocks and Flip Flop Cyber Stocks. The Flip Flop Cyber Stocks will be running for $150 to win in the first ever “Battle of the Flippers Presented by Steensma”.