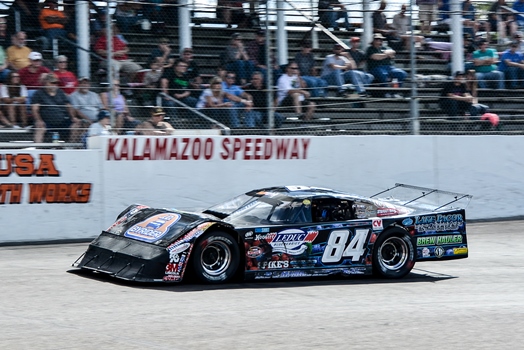 Most all week the talk leading up to the LKQ 100 at Kalamazoo Speedway had been on point leader Mark Shook and two-time defending champion Mike “Bubba” Brooks, who set just 9 points back heading into the season finale. Then in an instant, just three laps into the 100 lap event, everything changed. Shook was involved in an accident not of his doing, putting Brooks solidly in position to claim his third straight title. Fifty eight laps’ later things changed again, as Brooks, running solidly in the top five at the time, developed engine problems and was forced to retire from the event as well. All of a sudden the attention turned to the somewhat forgotten man in the championship battle, Jeff Bozell, who entered the feature 44 points out of the lead. It was determined that Bozell would need to either win the race or finish second to take the title away from Brooks, and collect his first crown. With less than twenty laps to go Bozell moved into the championship clinching second position, but could not hold off Matt Frazier who would eventually finish second, meaning the Bozell would come up just one point short in the season long championship battle. Brooks’ car had to be pushed on the front stretch for his third consecutive championship celebration. Brooks becomes the first driver since Jeff Bozell’s brother Andy Bozell to win three consecutive championships in the tracks premier division. Andy won an incredible eight titles in a row from 1998-2005.

The other forgotten man on the night was no doubt Brian Bergakker, who in the middle of all the championship drama drove to victory in the race itself. Frazier and Jeff Bozell finished second and third ahead of Brandon Lyons and Dave Lober. Bill Tomlinson led the second half of the top ten over Cory Pressler, Brandon Zachary, Rich Hardy and Dave Simpson. Notable finishers included Brooks in 11th, Billy Shannon (who had a mathematical shot at the championship heading into the night) in 19th and Shook in 22nd. Rick Senneker was the fastest of the twenty-four qualifiers.

Although he had already clinched the Pro Stock title Matt Corliss put an exclamation point on his title with a victory in the thirty-five lap feature. Corliss, set quick time, started deep in the field and drove all the way to the front to pick up the win over Zach Westdorp, Barry Jenkins, Keith Wilfong and Greg Brown. Josh Highbaugh finished a solid sixth beating out Chaz Hook, Doug Smith, Jerry Zachary and Wil Raber.

Logan Knight had the Mini Stock championship wrapped up before the night started but he, like Corliss, wanted to end the season with a bang. He did just that by setting fast time, starting dead last and picking up the win in the thirty lap Mini Stock feature. Steve Potter finished second ahead of Brian Echtinaw, Andrew Brest and Kyle Shannon. Doug Gallandt led the second half of the top ten over former champion Frank Stager, John Neal, Curtis Towne and Ryan Stutz.

Young Keegan Dykstra clinched the Outlaw Cyber Stock championship by setting quick time in the qualifying for the twenty-five lap event. Dykstra did all he could to pick up the feature win but came up just short, as Dan Rigoni took the victory. Dykstra finished second ahead of Nick Layman, Larry Richardson and Brian Gregersen. Dale Leonard finished sixth beating out Bob Miller, Josh Roberts, Scott Custer and Dyllan Uminn.

The Flip Flop Cyber Stocks kicked the night off with all sorts of action in their twenty lap “Battle of the Flippers Presented by Steensma”. Brock Sweeter, who had set quick time early in the night, had a comfortable 55 point advantage over Brad Hall, heading into the event. Sweeter however was involved in an accident on lap 9 and was relegated to a 14th place finish. Hall did all he could to capitalize on Sweeter’s misfortune, but came home second in both the race and the championship battle, just 11 points behind. The other story was Lane Head, who in his first ever race picked up the victory over Hall, Joey Failing, Jonathon Schuyler and Brooke Derrick. Keith Ribble finished sixth beating out Craig Lewis, Heath Bronkema, Duane Clark and Ricky LaDuke.

Next on the Kalamazoo Speedway schedule is the second half of the Labor Day weekend double header. Sunday, September 6 the season will conclude for the 4 Cylinder Enduro Series with the running of the Kalamazoo Klassic 200 Enduro Presented by LKQ. Ed Clawson brings a slim 9 point lead into the finale over Zack Cook, with Barry Jenkins, Jerrud Stout and Lenard Ganey in a three-way tie for third, just 14 points behind the leader.  The action packed evening will be kicked off with the fan favorite Spectator Drags and will conclude with the always entertaining Powder Puff race. Pit Gates will open at 3:00, general admission gates will open at 4:00 and the event will start at 7:00.

Then next Saturday, September 12 is the annual Call of Wild Presented by Raceceiver and Howe Patio & Window. It is a true “Run What Ya Brung”, which will feature a 50 lap, $1,500 to win event. As always, the event will also have a world-record breaking attempt during the “Howe Patio & Window Qualifying Showdown”, where the top five cars from final practice will have twenty-five minutes to attempt to break the world record of 10.020 seconds for a 3/8 mile track. The five drivers will bring home $500-$400-$300-$200-$100 and if one of them breaks the world record the will receive another $500, for a total of $1,000.