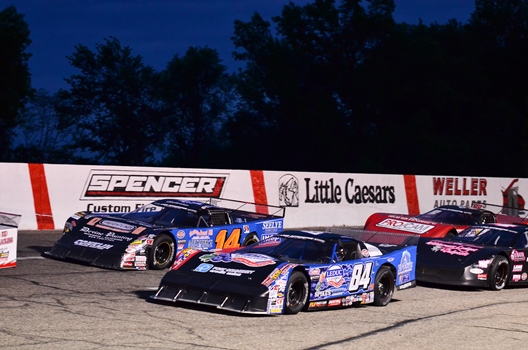 After setting fast time in the Outlaw Cyber Stock division Dan Rigoni started dead last and drove his way all the way to victory lane in the twenty lap event.  Rigoni made a late pass on Larry Richardson to secure the victory.  Richardson held on for second ahead of Brian Gregersen, Mason Dykstra and Ricky LaDuke.  Danny Rigoni led the second half of the top ten over 2015 Flip Flop Cyber Stock track champion Brock Sweeter, Jeremy Young, Nick Layman and Doug Nelson.  Sweeter and Dion Vrooman won the heat races.  Dan Rigoni continues to lead the points, now by 147 over Gregersen.

This WEDNESDAY, June 8 one of the biggest events in Kalamazoo Speedway history takes place with the running of the inaugural Gary Terry “Follow Your Dreams” 125 Presented by Quick Fuel Technology.  The event will pay $5,003 to the race winner and an incredible $1,003 just to start the event.  It will be a 125 lap race with no segment breaks, exactly like last year’s Kalamazoo Klash, which received tremendous feedback from fans and drivers alike.  There will also be a $1,003 to win Pro Stock/Street Stock Rumble, which promises to draw cars from all over the Midwest.  37 Outlaw Super Late Model drivers and 24 Pro Stock drivers are already registered to compete in this event, with more expected.  One lucky fan will also win a FREE Rent-a-Ride to be used during the 2016 season.  Practice for the event will take place this Tuesday, June 7 from 6-9pm.  Grandstand admission is FREE with 2 canned goods.  Although the weather looks perfect, in the event of rain the race would be run Thursday, June 9.