Bozell Wins Feature as Shook All But Clinches Championship @ the Zoo 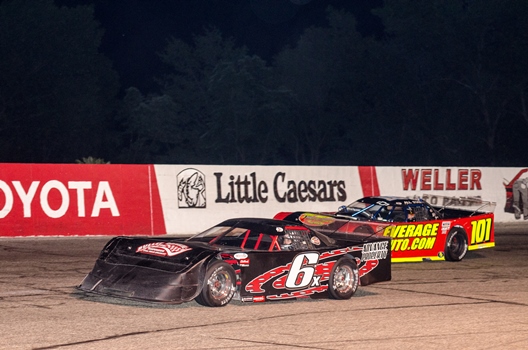 Bozell Wins Feature as Shook All But Clinches Championship @ the Zoo

2011 NASCAR Whelen All-American Series Outlaw Super Late Model track champion Phil Bozell picked up the win in the forty lap main event Friday night at Kalamazoo Speedway.  Todd Harrington was the runner up beating out Doug True, fast qualifier Adam Terry and Mark Shook, who all but clinched second consecutive track title.  Matt Frazier led the second half of the top ten over Craig Everage, Tom Thomas, Doug Rodanhisler and Chris Garrett.  Chris Koslek and Rodanhisler won the heat races.  Shook will bring a 144 point lead into the final event of the season over Harrington with Tom Thomas just one point out of second position.

Five-time champion Buddy Head collected the victory in the Super Stock feature all but ensuring that he will walk away from the 2017 season as a six-time champ.  Head beat Cory Pressler, Nick Pressler, four-time track champion Kenny Head and John Long to collect the victory.  2015 Outlaw Cyber Stock champion Keegan Dykstra wound up sixth ahead of Chris Shannon, AJ Foote, Josh Trammell and Kyle Shannon.  Buddy Head also set quick time while Phil Bozell and Cory Pressler won the heat races.  Buddy Head will bring a 144 point lead into the final event with Cory Pressler being the only other driver with a mathematical chance at the championship.

Tyler Hufford picked up the win in a thrilling Pro Stock feature that saw Alan Marcott finish just 0.169 seconds behind in the runner-up position.  Greg Brown finished third ahead of Kyle Ribble and fast qualifier Zack Cook.  Shane Miller finished a solid sixth beating out Josh Zordan, Barry Jenkins, John Chapman and Ron Landis.  Notable finishers included Keith Wilfong, who was involved in a last lap incident and finished a disappointing 14th.  Hufford and John Russell won the heat races.  Cook will bring a slim 28 point lead into the final night over Brown, which is equivalent to seven positions on the race track.  Ribble (-115) also still has a mathematical chance although it appears the battle will be between Cook and Brown as both drivers look to win their first track championship.

Kevin Sweat drove a great race to pick up the victory in the Flip Flop Cyber Stock feature over Tony LoBretto, Denver Sweat, Nick Failing and Brandon Sweat.  Larry West led the second half of the top ten over Grant Lofquist, Renee Letts, Kevin Leeman and Rick Basarabski.  Notable finishers included young Valerie Bozell, who was involved in a scary crash and finished 18th.  Todd Watson was the fastest qualifier while Lofquist and LoBretto picked up the heat race victories.

This Friday, August 25 the regular season will come to a close as all five divisions will crown their season champions.  The night will culminate with a 100 lap feature for the NASCAR Whelen All-American Series Outlaw Super Late Models as Mark Shook looks to walk away as a two-time champion.  The Super Stocks, Pro Stocks, Outlaw Cyber Stocks and Flip Flop Cyber Stocks will also crown their champions.