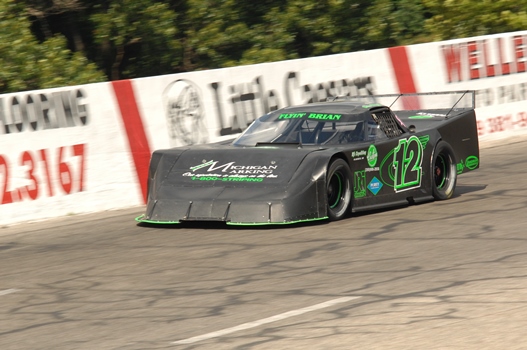 Defending champion John Foote Jr. won a thrilling thirty lap Pro Stock feature. Veteran driver Brent Hook finished second ahead of Greg Brown, Matt Corliss and Keith Wilfong. The second half of the top ten was led by Robbie Ferrier who beat out Zach Westdorp, Barry Jenkins, Will Raber and Brian Bradshaw. Greg Haynes was the fastest of 21 qualifiers with a lap of 14.470 seconds.

The Outlaw Cyber Stock division saw young Keegan Dykstra set fast time, start dead last and drive all the way to the victory in the twenty lap feature. Nick Layman made his return to the speedway with a second place finish ahead of Bob Miller, Brian Gregerson and Larry Richardson. DJ Oxford led the second half of the top ten over Doug Nelson, Jeremy Young, Josh Roberts and Alyssa James.

The much anticipated debut of the Flip Flop Cyber Stocks saw a very good race with Brad Hall, who had set quick time earlier in the day, starting dead last and driving through the entire field to pick up the victory. Enduro veteran Brock Sweeter finished second ahead of Lynne Zachary, Jeremiah Judd and Terry Kizer. Jonathon Schuyler finished a solid sixth beating out Keith Ribble, John Kennedy, Tony Hyatt and Dwight Anderson.

If the fans liked what they saw last Saturday they should expect more of the same this weekend as another full 6 in 1 show will be run this Saturday, May 9. The NASCAR Whelen All-American Series Outlaw Super Late Models will be back in action, with the running of the “Shifters 40”. AJ Foote, Billy Shannon and Todd Currier will be among the drivers looking to continue their solid starts to the season while two-time defending champion Mike “Bubba” Brooks will be looking to bounce back from his opening night crash. The Super Stocks will also return to action with Brandon Lyons trying to go back-to-back while Buddy Head, Chris Shannon, Rodney Smith and the others will be looking to pick up their first victories of the season. The Pro Stocks will run their rescheduled “Pro Stock Spring Fling Presented by Orrin B. Hayes”, which will pay $600 to the winner. Mini Stocks and Outlaw Cyber Stocks will be in action as will the Flip Flop Cyber Stocks, who will be running the “Flip Flop Cyber Stock Nationals Presented by NAPA”, which will see the winner take home $150.  In addition to all of the racing action it will be Autograph Night, which will see every car and driver on the track before the races to sign autographs for the fans!  Racing will start at 6:30.